Chick-fil-A just launched Chick-fil-A One, their new app that offers mobile payments, order ahead, a rewards program and more.

Specifically, customers will be able to customize their order on the app before heading into the restaurant, so they can skip the line upon arrival. And the rewards system will surprise users with different menu items based on previous orders, the progress of which can be tracked in the app.

Cool stuff, but not exactly enough to make it the most popular iPhone app in America right now, especially considering there are less than 2,000 stores in the country (compared to almost 15,000 McDonald’s locations).

So why is the app currently sitting atop the app store? Because the company is offering a free sandwich to anyone who downloads and signs up for the program.

Get a free Chicken Sandwich when you download and join #CFAOne today. Offer ends 6/11. pic.twitter.com/hWO65w6oOK

In fact, the update has been live since late May, but the app hadn’t even broken the top 100 — that is until earlier today, when it unveiled the free sandwich deal. The app immediately shot up almost 500 spots, presumably fueled by hungry Chick-fil-A fans around the country. 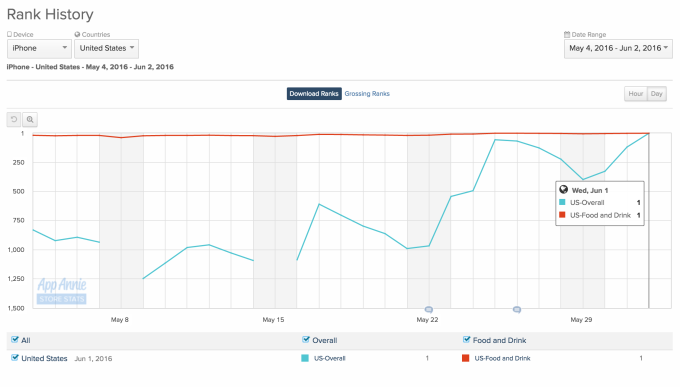 But is this a sustainable solution? Certainly not. We’ve already discussed how almost one in four people abandon mobile apps after just one use. No matter how great their app is, Chick-fil-A will likely see similar a similar trend, especially after customers claim their free sandwich.

Anyways, while the fast food company enjoys their 15 minutes of App Store fame, you might as well cash in and go get a free sandwich. The app can be downloaded from the iOS App Store and Google Play Store.