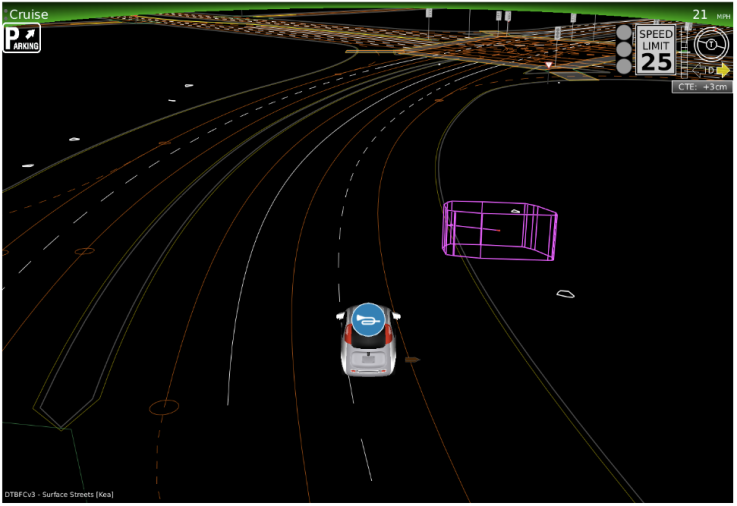 A trumpet icon indicates when the car feels like honking.

The Bulwer-Lytton fiction contest is a yearly competition in which writers attempt to create the worst possible opening sentence to a novel. Google, for several reasons, should enter this year — in its latest self-driving car project report (PDF), the company writes: “As our honking algorithms improved, we’ve begun broadcasting our car horn to the world.”

Aside from the absurdity of that sentence (which surely is unique in the history of sentences), the news really is interesting. Google has, apparently, been testing the application of the horn for some time now as a means to alerting other drivers of the car’s presence — but only played it inside the cabin. This way, human evaluators could rate whether the “honking algorithm” was on target or not.

Having reached some internally accepted level of competency, the cars are now allowed to use the horn in two ways. If it’s imminent danger, such as someone veering into the car’s lane going the other direction, a traditional blast of the horn will be employed. But if, for example, someone is obliviously backing up toward the car in a parking lot, “we might sound two short, quieter pips,” the report reads.

Beyond the honks and “pips,” the cars will also now emit a humming noise designed to make pedestrians, especially those with impaired sight, aware of the car. This is a challenge faced by many electric cars, and manufacturers have tested many solutions, from simulated engine noise to a UFO-like warble. Google’s description of the vehicle’s hum suggests it leans more towards the former, though in the interest of “personality,” a little something extra has been added, which the document fails to detail. Perhaps one of our readers lucky enough to encounter a Google car in the wild can furnish a first-hand report.

The recurring accident enumeration portion of the Google report is thin: only one accident, in manual mode, in which the car hit the median at a blistering 9 MPH.