The startup has also raised $10 million in a new funding round led by video-specialized investors Marker LLC to become the new standard for measurement of online videos, no matter where they surfaced on social media.

In its early days, Tubular only worked with “influencers” and the multi-channel networks that distributed their videos to prove their worth to potential sponsors or advertisers.

According to co-founders Allison Stern and Rob Gabel, as online video consumption exploded, Tubular expanded its analytics and software-as-a-service to be able to measure video plays, shares, likes and more across some 30 different social media platforms.

The company also developed a monthly ranking of top video publishers to help marketers decide where to spend their sponsorship or advertising dollars, or where to publish their own, branded videos. “Media companies really get obsessed with their own scores, and why they’re moving up or down in the rankings,” said Stern.

The reports also show where a video garnered the most shares, likes or comments. And Tubular provides a cross-platform benchmark, called the ER30 score (“engagement rate”), that shows publishers how engaging their video was compared to all other videos out there.

The company’s system knows, from metadata, if videos were livestreamed, user-generated, created by a professional in a studio, sponsored or ad-supported with commercial breaks.

It analyzes data attained through public systems online with the help of a few APIs. But Stern said Tubular does not yet measure personal, private data such as how long a user spent viewing a video or reviewed segments within it.

The new funding will go toward product development, hiring, sales and marketing, said Gabel. The CEO also said he wants to grow headcount from about 65 full-time employees today to at least 130 within the next year.

Canaan Partners’ Warren Lee, a Tubular board member, sees the company as providing “a standard currency” for the online video industry. He said, “In the same way that Nielsen covered TV, or ComScore covered the Web 1.0, we think there’s room for Tubular to be the big player that emerges to cover online video.” 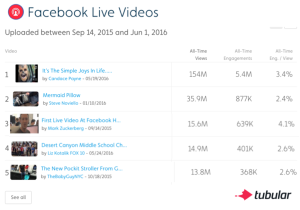 Stern, who is co-founder and a vice president of business development at Tubular, added that of course the startup will add new social media platforms over time, as well. She declined to name names, but Snapchat is an obvious target with its growing discovery platform.

After four years analyzing as much online video data as it possibly can, since 2012, Tubular has already come to understand which videos play best and where, said Stern.

Stern said, “The mermaid pillow video got 35.9 million views in the month of January when it first went viral. But the Chewbacca lady killed it, with 154 million views and it just came out. Before that, the top 5 videos going back to September 2015, which is when Zuckerberg put up the first live video on Facebook, all had 33 million views or lower.”

And Colbert is still getting more online video views than John Oliver, across social media.