Raise your hand if you know much about how alcohol distribution works in the United States.

Fine, I can’t actually see how many of you have your hands up, but for those of you who don’t know: It’s apparently a pretty antiquated system, with three tiers — the businesses that produce the alcohol have to sell to distributors, distributors have to sell to retailers (whether it’s a store or a bar or a restaurant), who then sell to consumers.

A startup SevenFifty is working to rethink that process, and it’s announcing that it has raised $8.5 million in Series A funding.

The round was led by Formation8, the venture firm founded by Palantir’s Joe Lonsdale, with participation from Pritzker Group VC and others. Drew Oetting of Formation8 and now 8VC is joining SevenFifty’s board of directors.

(A brief, insider-y digression: You may recall that Formation8 is winding down its investment activities, with Lonsdale and several other Formation8 partners instead raising a new fund as 8VC. SevenFifty was the last deal from the old Formation8 fund.)

Anyway, the New York City-based startup isn’t looking to disrupt the whole alcohol distribution process (that would be a pretty tall order), but instead to make it easier for the retailers to see what distributors have to offer. As explained to me by CEO Aaron Sherman, retailers currently make their orders after browsing thick, phone book-style catalogs (which don’t even have comprehensive listings), or just by talking to salespeople.

That means it’s tough for the retailers to see what all of their options are. And it can be tough even for a sales rep to stay on top of all their offerings, particularly if they work for a large distributor. 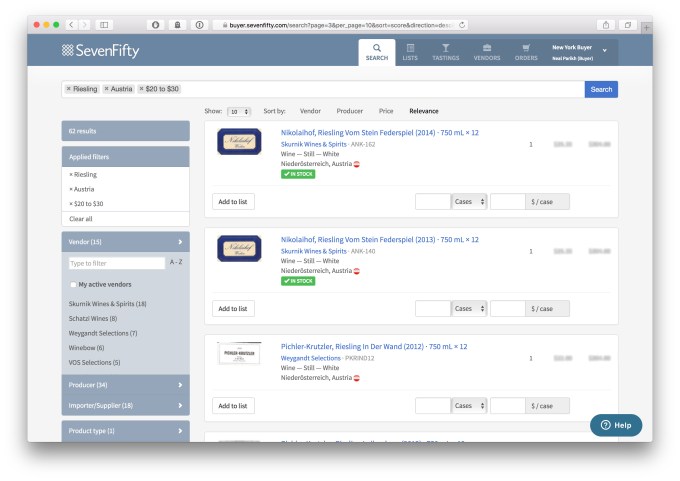 SevenFifty replaces that system with a searchable database of inventory across distributors. Product listings are standardized across those distributors, and the results that a retailer sees are tailored to what’s available and who’s selling in their location. Distributors, meanwhile, also get a customer database that makes it easier for them to keep track of buyers and notify them about tasting events.

Founded in 2012, SevenFifty says it already works with more than 700 distributors in 30 states, with more than 30,000 retailers doing their sourcing on the platform. For example, John Ragan, the director of wine and restaurant operations for Danny Meyer’s Union Square Hospitality Group, said in the funding release that using the platform has allowed the company to “operate more efficiently when building wine and cocktail programs, and bring a more comprehensive selection to our diners.”

“We have the first universal record for any instance of any [alcohol] product,” Verga said. “We can say, ‘This is the product, this is the universal identifier, these are all the people who are selling it.’ We can link a bunch of information, which could, someday, power consumer-facing products going forward.”