Researchers in the Netherlands claim to have created the world’s first “robots that procreate.” What does that mean exactly? Well, child, when two robots’ fitness evaluation algorithms come to a successful conclusion, something beautiful happens. You’ll know when you’re older — or if you scroll down.

“This breakthrough is a significant first step in the Industrial Evolution and can play an important role in, for instance, the colonization of Mars,” reads the press release for the “Robot Baby” project. Well, from the humble acorn grows the mighty oak and all that, but these claims should be taken with a fistful of salt.

“Mating” and “evolving” robots appear now and then in research, from self-reproducing “molecubes,” to a robot “mother” selecting the best of its brood, to robo-fish competing and sharing their “genes.” (Sorry, I have a quotation marks “quota” I’m trying to fill in this “article.”) So far, no gray goo or robot armies.

But the new project still offers something new, if only as a proof of concept. Two robots (or conceivably more in the future) made of semi-random configurations of motorized blocks and capable of lurching movement, are given the impetus to make their way towards a bright light (in life this behavior is called phototaxis). Those that arrive quickly, proving their locomotive merit, can contact one another and evaluate whether they’re suitable mates.

What that process consists of there is precious little detail on, but one can imagine: similar block count and leg length, comparable time on the half-meter dash to the light. 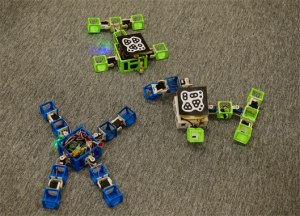 At any rate, having met, they go on a few dates (to the router) and, having fallen in love at first byte, they submit their genetic material — that is, the code and hardware they are running — to be mixed and synthesized into a new robot. That’s the sex part, in case you were wondering.

The resulting robaby, in this case a hideous chimera consisting of dad’s right leg, mom’s left leg and tail/stabilizer, and god knows what babbling, buzzing confusion in its newborn silicon brain, is printed piece by piece and assembled by the lab techs.

While the claims of the researchers are something of a reach, they aren’t absurd. Self-modifying robots can adapt to situations and environments on their own rather than waiting on instructions from human monitors.

And natural selection algorithms can produce unique solutions that people, with their puny, fleshy brains, might never hit on. If someone just straight up proposed a giraffe, for instance, would you approve? Yet they seem to be doing just fine. (This programme investigating their ludicrous anatomy was very interesting.)

If you doubt the evolutionary ingenuity of computer-controlled natural selection, look up “evolved virtual creatures” or find a way to run the supremely entertaining BreveCreatures.

The Robot Baby project is the robot baby of Guszti Eiben, professor of AI at Vrije Universiteit in Amsterdam. It was presented as part of the Campus Party traveling tech fair.