Force touch may be a feature exclusive to the latest iPhones, but something like it is now possible on pretty much any phone out there, thanks to research from engineers at the University of Michigan.

It works not by polling sensors in the touchscreen, but through ultrasound. The phone’s speaker emits a sound covering the 18-24 kHz range, well outside what a human can hear — but the device’s microphone can detect it just fine. When the user presses on the screen or squeezes the phone’s body, the character of the sound changes, and the software detects that. 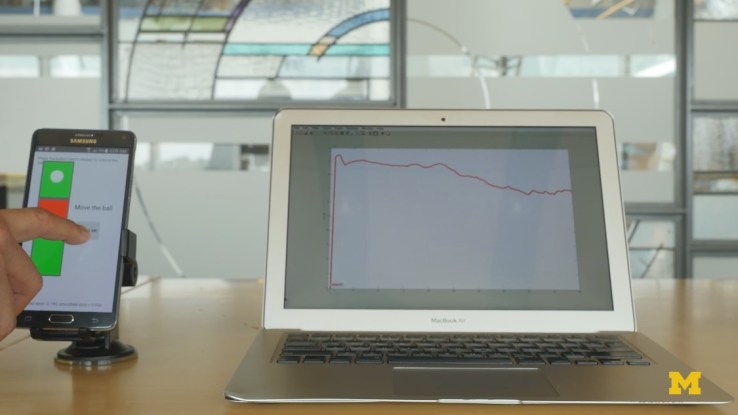 Don’t worry, though — the sound is played at a very low volume, so it won’t bother any dogs or sharp-eared young folks in the area. 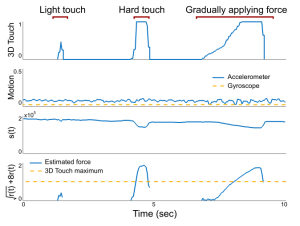 Touches with different pressures don’t register on the gyro or accelerometer, but are clear as day to the ForceTouch process.

“You don’t need a special screen or built-in sensors to do this,” said Kang Shin, professor in the university’s electrical engineering and computer science department, in a UM press release. “ForcePhone increases the vocabulary between the phone and the user.”

A hard squeeze could return the phone to the home screen, for instance, or a series of them could call 911. Varying pressure can be detected, too — it isn’t binary. It’s not quite the level of detail you get with the sensors in an iPhone 6s, to say nothing of those in, say, a Wacom tablet, but it seems like enough that you could rely on it as a gesture.

Shin and his grad student, Yu-Chih Tung, were inspired by, of all things, a recent Batman movie. You might remember in “The Dark Knight” when Batman turns all the phones in the city into sonic locators in order to find the Joker.

“I thought it was an interesting idea to turn smartphones into a sonar-based system and felt this could lead to new applications to address challenges faced by smartphone users,” said Tung.

I’ve asked for a bit more information on whether the process is affected by ambient noise, and when we can expect a public release so you can try this yourself. In the meantime, Shin and Tung will be presenting their work next month at MobiSys in Singapore.