SyndicateRoom, the U.K. equity crowdfunding platform that last week announced that the world’s first equity-crowdfunded Hollywood film has signed Antonio Banderas to appear in its movie, has some big news of its own today, announcing a £3.1 million ($4.5 million) Series A from a number of heavy hitting angel investors.

The round was led by Abcam founder Jonathan Milner, who noted he is excited about the company’s “superb leadership and a brilliant company culture.” Unicorn AIM VCT was the largest investor in this round, putting down a $1.4 million bet on the company’s future. 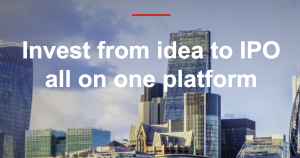 SyndicateRoom makes it easier for investors to invest in companies from idea to IPO.

Of course, the company used its own platform to raise the money, but spectacularly overshot its target. The goal was to raise $3.35 million at a $36.5 million valuation, but the company smashed through that goal in less than 10 hours. This beats the company’s previous record for its angel round about a year ago, when it raised a $1.75 million round in around 33 hours.

“We are building a platform for companies to raise equity investment at all stages of their equity journey, from idea to IPO,” said Goncalo de Vasconcelos, CEO and co-founder of SyndicateRoom. “To have such strong demand from both retail and institutional investors is the strongest vote of confidence we could have regarding our expansion plans within crowdfunding and equity capital markets.”

Earlier this year, SyndicateRoom became a member of the London Stock Exchange, which means that users of the platform are able to participate in IPOs and placings. The company points out that it is the first platform of its kind to enter the public markets, enabling individual investors to have access to new equity issues on the same terms as institutions. The big news here is that there’s a huge number of sophisticated angel investors who have a desire to participate in IPO activity, but were lacking a mechanism of doing so easily. Strategically, for SyndicateRoom to now support companies from idea stage right through to IPO is tremendously exciting for investors and companies alike.