It’s been a big month for trucking innovations. In addition to Otto’s autonomous truck announcement, there’s the unveiling of Nikola Motor Company’s electric long-haul rig concept. The Nikola One, as it’s called, has “6×6 all-wheel drive,” with 800-volt AC motors and regenerative braking at all wheels. And a whopping 2000 horsepower, compared to the 400-500 hp that most trucks have.

It also has a tank that holds 150 gallons of compressed natural gas, which powers a turbine that charges the 320 kWh lithium-ion battery pack. The idea is that drivers would not have to stop to charge; the CNG plus regenerative braking would be able to power the truck for 1200 miles of driving. It’s similar to how the Chevy Volt works, where the gasoline tank recharges the batteries. The Volt and the Nikola One are both electric vehicles in that electric power from the batteries turns the wheels, but the batteries are most often charged by an on-board generator or turbine.

That’s not the only similarity to another company that Nikola Motor Company has. You may have noticed that it uses the first name of inventor Nikola Tesla; the last name has already been used. NMC makes no bones about its admiration for Tesla Motors, but where Tesla started with a wee roadster and worked toward the midsize sedan, NMC is coming at the problem from the opposite—and much larger—side of the equation. It hinted at more vehicles for other markets to come in the future on its website, but NMC is likely hoping to get the Nikola One onto the road before tackling passenger vehicles. 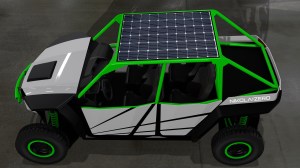 For those who aren’t quite ready to plunk down $1500 for a reservation on a $350,000 electric tractor-trailer, NMC also announced a dune-buggy-esque 4×4 off-road vehicle called the Nikola Zero. For a $750 reservation ($42,000 MSRP), you can get in line for 520 hp of all-electric, waterproof driving. The Zero plugs in like most EVs do to recharge the 440-volt lithium-ion batteries rather than using CNG and a turbine, though it does have solar panels on the roof to power the 12V battery.

While there are plenty of specs and numbers published on NMC’s web site for both vehicles, there isn’t a delivery date for either of them. Also, these vehicles do not yet exist in the physical world—at least not in a form that NMC can use for photos. So far, the only images of the One and Zero are digital renderings. We’ll see if a thorough list of stats is enough to raise the capital needed get these vehicles from CAD to the real world.