The HAX hardware accelerator held its 8th Demo Day in San Francisco yesterday. While all 15 companies in the latest batch hold promise, and encompass some very wild ambitions, these three stood out thanks to creative applications of advanced tech to sometimes overlooked, but truly massive potential markets. 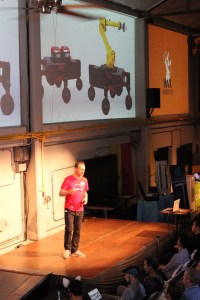 Based in Lausanne, Switzerland, Rovenso is adapting technology created for planetary exploration to use in the industrial world here on Earth.

The company’s ROVéo 250 is a remotely operated vehicle that can navigate rugged terrain, endure harsh environments and do the very heavy lifting that humans would find challenging even with the right tools in tow.

The rover is battery-powered, and human-operated remotely using a controller that gives tactile feedback to a driver. Doing this instead of just providing a mobile app to run their rovers should help drivers understand instantly when the ROVéo 250 is stuck in a ditch, or in the midst of a steep climb, then make adjustments if needed.

Co-founders Lucian Cucu and Thomas Estier said they were inspired by generations of Mars rovers, but also the Fukushima Daiichi nuclear disaster, to build their machine.

The company  will develop and rig its rovers with custom, robotic arms to do different tasks for customers. Rovenso already has signed one customer, and wants to raise venture capital to bring robotics automation beyond nuclear, to mining and civil engineering, oil and gas and construction businesses.

Cucu said, “If it’s a harsh environment, that’s dangerous humans, or you need to automate the process and flow of heavy materials, that’s where our technology makes sense.” 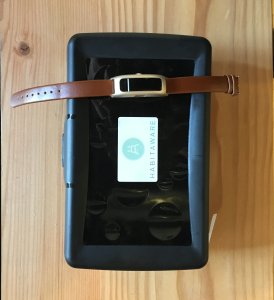 The LIV by HabitAware.

HabitAware is a health tech startup that sprang, as so many do, from the founder’s personal challenges dealing with a “body-focused, repetitive behavior;” in her case, obsessive hair pulling.

“I hadn’t had eyebrows since I was a teen,” said HabitAware’s co-founder Aneela Idnani Kumar, head of product, design and marketing. “Several years into my marriage, I showed my husband what I looked like without my eyebrow makeup on, and we decided to build something to help me and others who have this problem.”

Kumar and her husband, CEO and co-founder Sameer Kumar, built smart bracelets that wearers use to gently conquer their repetitive behaviors.

The wearables, called the LIV, contain sophisticated motion sensors and connect to a user’s smartphone via Bluetooth. A LIV mobile app initially calibrates the bracelets so they can silently monitor a wearer’s activity and vibrate to alert them when they’ve begun to engage in an unwanted behavior.

After they’re set, the bracelets work without being connected to a smartphone.

Wearers get a two-bracelet set for a suggested retail price of $279. Those who do not use both hands when they engage in an unwanted behavior can opt for a single LIV bracelet for $149 at retail.

Beyond hair pulling, kids and adults alike struggle with nail biting, skin picking and thumb sucking. They usually engage in this behavior around certain triggers or stresses that can be pegged to a certain time of day.

When users choose to connect their bracelets to their smartphones via Bluetooth, the LIV app shows them a chart tracking the times of day when they are most likely to fall into their repetitive behaviors.

That way, users, or their parents, can take special measures to help them get through that troubling time of day without triggering their habits.

The company estimates that 30 million people in the U.S. suffer from some form of repetitive, body-focused behavior. HabitAware is currently taking pre-orders. 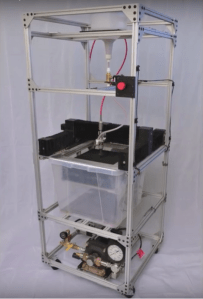 With a company name that’s a portmanteau of lasers and water, this New York-based startup is working on building a relatively low-cost water-jet cutter that can slice through steel, glass or, for that matter, fabrics and pastry, without burning any materials or giving off toxic fumes.

Co-founders Nisan Lerea (CEO) and Matthew Nowicki (CTO) say they want to sell their cutter to “makers,” especially contractors who may want to use it to create custom tiles and steel brackets or other parts to make home repairs, as well as jewelers and interior designers who want to cut beautiful shapes without creating toxic fumes in a home studio or small shop.

The machine’s footprint size is about 2 feet by 3 feet today. So it’s not quite a desktop model, but it is a scaled-down version of water-jet cutters only available for tens of thousands of dollars and for factory use.

The company is still refining its prototype. It plans to offer custom-design software, but the co-founders said, more importantly, they will integrate with and make it easy for designers to use the tools they have already mastered, like AutoCAD, SolidWorks or Adobe Illustrator.

Read more about the HAX VIII companies, and challenges facing all hardware startups.