Today, the International Space Station completed its 100,000th orbit around the Earth since its first module was launched on November 20th, 1998.

To celebrate that milestone, NASA teamed up with Snapchat for a space-themed Live Story called Day in Space. Up on Snapchat now, the feed features NASA astronaut Tim Kopra, Commander of Expedition 47, living and working on the International Space Station (ISS).

“One thing that never gets old here is looking down on our beautiful planet.” Astronaut Tim Kopra

Kopra uses the video to show off the view of the Earth from the ISS, a Low Earth Orbit laboratory that’s traveling at 17,500 miles per hour, completing a full orbit around our planet every 90 minutes. Kopra notes that because of this the crew is able to witness 16 sunrises and sunsets every single day.

The Live Story features videos of Kopra doing everyday tasks in a weightless environment like flying from one module to another, conducting science experiments with globules of water, eating a tortilla, and doing a mid-air flip.

Because crew often live and work on the ISS for extended periods of time, it’s an ideal environment to analyze the long-term effects of weightlessness on the human body. Over time, an astronaut living in a weightless environment will experience muscle degradation and bone density loss, among other issues. 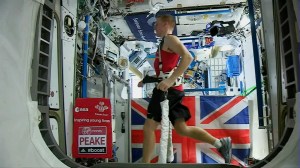 Space agencies are concerned with this issue because in order to send humans farther out into the solar system, like to Mars for example, astronauts will be required to survive long journeys floating inside their spacecraft.

The most notable experiment on this topic to date is Astronaut Scott Kelly’s Year in Space. Kelly completed a 340-day mission that ended in March of this year, while his identical twin brother, Mark Kelly (also an astronaut), stayed down on the ground. The brothers are part of NASA’s ongoing Twins Study which involves 10 investigations designed to understand the long-term effects of living in a weightless environment.

Good morning, #AbuDhabi! You were impressive from 250 mi up on my #YearInSpace. Great to be visiting you today! pic.twitter.com/Ow3KD10tru

At the end of the Day in Space Story, Kopra shows off the Russian Soyuz vehicle docked to station saying that they are “currently packing it up, getting it ready to go home.” This time next month, Kopra will be preparing to board that vehicle on a trip back to Earth. His ride, the Soyuz TMA-19M, is scheduled to depart from the ISS and land on June 18th.