A company called Laugh.ly wants to make streaming sets from the best comedians as easy as streaming music on Pandora. Though not yet available to the public, Laugh.ly’s iOS application will allow users to follow both big-name comedians like Louis C.K., Kevin Hart, Aziz Ansari and Amy Schumer, among others, as well as emerging stand-up comics looking for a way to grow and monetize their fan base.

The company has lined up more than 400 comedians whose content will stream on its app, and a total of 20,000 individual tracks.

These content deals were often made with comedians directly, explains Laugh.ly’s founder Dave Scott. “It’s different from musicians,” he says. “[Comedians often] own their own rights, or they’re owned by mom-and-pop shops.”

However, several of the bigger names on the platform came in via the larger record label deals, he notes. In addition, the company is working with brands like Uproar, Shout, Laughing Stock and other big names in comedy (think TV), to license content. 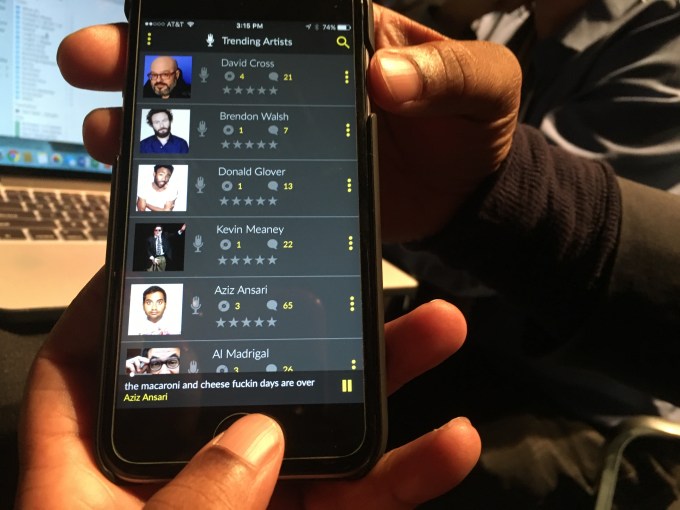 Scott is a third-time founder, having previously started an e-commerce site for entertainment merchandise, nextplanetover.com, as well as a marketing automation company, Marketfish, that worked with Disney, Direct TV, Norwegian Cruise Lines and others. While both of these allowed for some cross-over with the entertainment industry, that wasn’t what prompted the idea for Laugh.ly.

Instead, Scott was inspired to work in this space because he became a stand-up comedian himself. After the sale of his last company, he began taking classes at the Upright Citizens Brigade and doing open mic nights. He later moved to San Francisco and attended San Francisco Comedy College. (He even once had Tracy Morgan chase him outside after a bad set to remind him that “hey man, everybody bombs.”)

The business model for Laugh.ly is similar to Pandora’s, as comedians will participate in a revenue share with the company, while the service itself is ad-supported to remain free for consumers. Also like Pandora, users can choose to upgrade to an ad-free experience.

For $7.99 per month, Laugh.ly’s premium customers can ditch the commercials, save content for offline access and stream exclusive content the company is developing in partnership with the comedians participating on the platform.

However, Scott points out that Laugh.ly isn’t just another content play — the company has developed legitimate tech IP, too. For the past several years, Laugh.ly’s developers have been working on technology that’s a lot like Pandora’s Music Genome Project, but for the spoken word. That is, the company’s platform transcribes every joke it processes, so it knows what the jokes are about as well as their larger context.

This allows consumers to create smart playlists using the app. For example, they could create a playlist (aka a “station”) that just contained Trump jokes.

Another nice feature that having transcriptions allows for is the ability to quickly toggle on or off the profanity in a stand up’s routine — helpful for when you’re listening around kids, perhaps.