Apple’s App Store search is experiencing significant issues this morning, which, if allowed to continue for a longer period of time, could end up impacting app developers’ sales. The problem is that keyword searches on the App Store are simply not returning the appropriate list of apps, and aren’t even able to pull up many apps by name. This is true even for major brands, like Google, Uber, Tumblr, Vine, Spotify, Candy Crush, YouTube, and several others.

The issues were first noticed by a number of users on Reddit and Twitter, and have now been covered by Apple-watching blogs like MacRumors and 9to5Mac.

You can see the issue for yourself (as of the time of publication) by doing a search for a popular app like the Twitter client “Tweetbot.” If you search for it by name, you’ll find that it won’t appear in the search results.

Alternately, you can search for a particular genre of app, like “rss reader,” and find that the search results are incorrect here, too. This particular search, for instance, leaves out a number of top RSS reader apps, like Feedly, Reeder, Feedbin, NewsBlur, and many more.

In addition to the search issues themselves, App Store links are also not resolving in some cases, as the developer of the game “Dashy Crashy” noticed this morning.

That is, the URL that begins with “appstore.com/” followed by the app name (e.g. appstore.com/dashycrashy) no longer direct the user to the app in question. Instead, they’re met with a blank web page showing only the error message “Http/1.1 Service Unavailable.”

While it’s unusual for Apple’s App Store search to completely fall apart in such a dramatic fashion, the issue has brought to the forefront of developers’ minds a host of complaints they’ve had with the App Store as well as its discovery issues.

Developers have been unhappy that even at the best of times, saying that it’s hard for users to discover their apps. They also have issues with the often lengthy and not entirely transparent app review process, plus the challenges with monetization that exist even for popular applications.

More concerning is the fact that Apple’s plan to address some of these issues may be to allow developers to pay for a top spot in search results – following an advertising model similar to Google’s. However, if the App Store search to begin with doesn’t function reliably or well, that could be putting the cart before the horse, so to speak.

Apple’s status page wasn’t initially showing there were any issues with its services, but was later updated to “yellow” with a note that says “service is not working as expected for all users.” 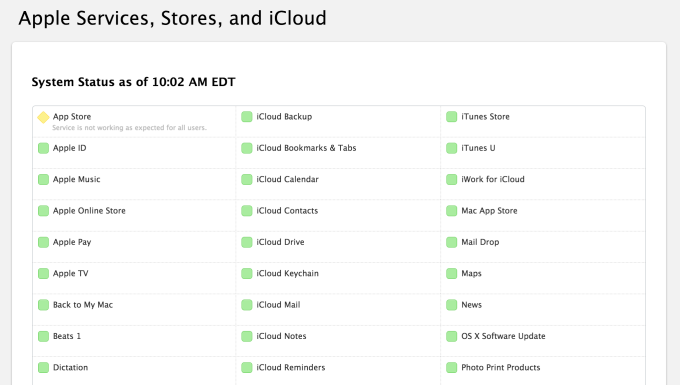 “Users are experiencing a problem with the App Store,” Apple support page indicates. “We are investigating and will update the status as more information becomes available.”

Update: Apple has fixed the issue as of 11:54 AM ET, we understand. (The Status page has returned to green. However, we’re currently investigating reports that claim there are still ongoing issues though high-profile apps have been fixed.)