It’s another victory for the machines: a robotic surgical system outperformed humans and robot-assisted human operators in a soft-tissue procedure, bringing us that much closer to automated medical care (and the robocalypse). 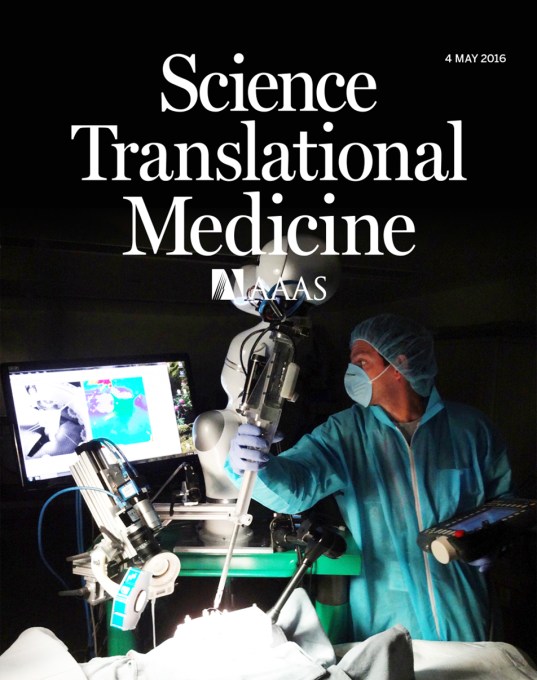 The Smart Tissue Autonomous Robot (STAR) was designed at the Children’s National Medical Center as an attempt to bring automation to soft-tissue surgery, a field where the versatility and spatial skills of human surgeons have long made them essential.

“As surgeons, we usually do three things,” said lead researcher Peter Kim, of the Sheikh Zayed Institute in a press call, “we use our vision and we use our hands for dexterity and then we use our mind as cognition to make judgment and then carry it out. We improved on all these things.”

STAR uses advanced computer vision tech that uses fluorescent markers and 3D cameras to get a detailed view of the surgical site. It then chooses from a variety of surgical techniques programmed into its database, and carries out the action with, naturally, machine-like precision, speed and efficiency.

You can watch it in action here, if you don’t mind the whole exposed innards thing.

In the experiment, the same procedure (bowel surgery on a pig — not glamorous, but a representative testbed for operations on humans) was performed by STAR, by human experts and by humans assisted by a Da Vinci surgical robot. The result: victory by STAR on a number of metrics.

Despite dynamic scene changes and tissue movement during surgery, we demonstrate that the outcome of supervised autonomous procedures is superior to surgery performed by expert surgeons and RAS technique. (from the abstract)

It should be noted that humans had to assist the robot in certain tasks here and there, but that’s to be expected; it’s supervised autonomy, after all — humans need to be on hand in case technical difficulties crop up, like a power failure or failed part.

In other words, it’ll be a while before you can get in a Prometheus-style surgery pod (and thank god for that, for several reasons). The future, or at least the future envisioned here, is one of harmony and cooperation between humans and robots.

“Even though we take pride in our craft at doing surgical procedures, to have a machine or tool that works with us in ensuring better outcome safety and reducing complications would be a tremendous benefit,” Kim said.

“With the right partner,” he added later during a question and answer period, “some or all of this technology can be incorporated into the commercially available, clinically applicable tools — probably within the next two, no more than three years.”