Today, GoPro released some pretty incredible footage of a suborbital rocket launch that climbed to 396,405 feet at speeds as high as Mach 5.5. Check out the very real footage below.

The launch in the video took place from Spaceport America in New Mexico on November 6, 2015, with a 20-foot tall SpaceLoft-10 sounding rocket from Colorado-based launch provider UP Aerospace.

It was the company’s fourth mission for NASA’s Flight Opportunities Program, which selects “promising new space technologies from industry, academia and government, and provides them access to relevant environments for flight testing.”

As the launch begins, the rocket immediately starts spinning rapidly. This is known as spin-stabilization, a common strategy used for some satellites or rocket launches to control altitude. Like a spinning top, motion about one axis on a rocket can be controlled if it’s spinning fast enough.

At 60 seconds into the flight (1:17 in the video), the mission successfully releases the nose fairing and ejects the 11 pound re-entry capsule known as Maraia. 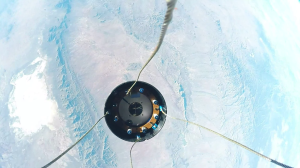 NASA’s Johnson Space Flight Center designed and built the Maraia capsule, which begins to enter the Earth’s atmosphere around the 2:38-minute mark and safely touches down at the end of the video.

With the suborbital launch, NASA tested the entry, descent and landing capabilities for the Maraia Earth-return capsule. In a press release, NASA stated that the capsule is expected to become an “inexpensive, autonomous International Space Station-based vehicle to provide on-demand return of small scientific and engineering payloads.”

All experiments and the Maraia capsule were recovered intact on the U.S. Army White Sands Missile Range.