If you’re anything like me, most of the time you don’t use your phone as, well, a phone, but as a conduit to the internet. Charge is a new mobile internet provider who aims squarely at the generation of people who prefer to tap on their mobile devices rather than talk into them. Next week, the company is launching a $10 per month SMS-and-data plan, and a $20 per month plan that adds unlimited voice, too.

If you need neither voice nor SMS, the data-only plan costs $3 per month per device. Data usage is shared across all devices, and can be banked for later use if you don’t use all of it.

The U.S. is technologically at the cutting edge of a lot of things, but, as I realized when I moved here a few months ago, affordable home and mobile internet plans isn’t one of them. Compared to the price tags I’m used to in Europe, the U.S. is horrendously expensive, especially when considering how I use my device. In the UK, for example, the data-first carrier Three offers unlimited data (!) for $30 per month. 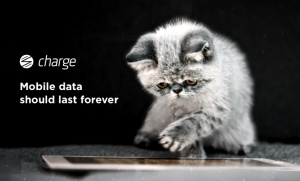 A company using pictures of kittens in its press pack is inherently likeable in my book. Where do I sign?

“We don’t have a data cap”, says Charge’s founder and CEO, Andrew Benton, who got his first taste at scaring the crap out of established telecommunications companies as one of the lead software engineers at Twilio.

Charge pivoted from being a messenger app previously called Bolt, and launched a data-only plan back in March, and has had a lot of interest, but the new SMS and Voice plans come in response to demands from users who aren’t quite ready to fully cut their phone service just yet.

“We are aiming to be the most flexible phone company, and we don’t force you to use anything you don’t want. We introduced phone and SMS plans after significant demand, but if you later find out you don’t need voice or SMS services, you can turn them off at any time.”

The company priced its plans to take on Google’s Project Fi head on, but has the additional benefit of working on any phone that supports the Sprint network, including the iPhone, rather than the limited selection of Android phones supported by Google’s mobile plan.