It’s not exactly a Netflix or YouTube rival, but AT&T-backed Fullscreen is hoping to carve out its own niche in the now-crowded subscription video market with its new service, launched this week. The $5 per month offering includes a mix of shorter, original content alongside full-length Hollywood movies and TV shows, like “Hitch,” “Dawson’s Creek,” and “Saved by the Bell,” for example.

At launch, the company says there’s over 800 hours of content available for streaming, in an app that works across iPhone, iPad, Android smartphones, Chromecast, and via the web at Fullscreen.com.

Unlike YouTube, where the majority of content comes from user-generated videos, Fullscreen’s original lineup involves several scripted series, like its reboot of a 1970’s TV series, “Electra Woman and Dyna Girl,” featuring YouTube stars Grace Helbig and Hannah Hart, which focuses on the lives and adventures of two under-appreciated crime fighters. 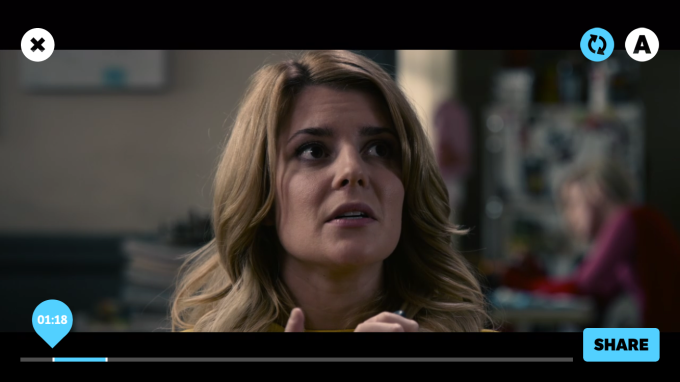 Other shows speak to familiar and popular formulas for teen fare.

For example, “Filthy Preppy Teen$” may appeal to the demographic who watches things like “Pretty Little Liars,” or the CW network. “Making Moves” combines the popularity of dance shows and their creative choreography with a scripted series about trying to make it in L.A.

Unscripted series include “My Selfie Life,” plus unfiltered conversations on shows like “Shane & Friends,” “Zall Good with Alexis G. Zall” and “Kingdom Geek.”

Meanwhile, nods to teen and millennial culture are rife throughout Fullscreen’s app and its videos.

For instance, its docu-series called “My Selfie Life” has an episode featuring a subject who lost 200 pounds via Instagram; “#O2LForever” follows a YouTube supergroup as they embark on their North American tour; and within the first 5 minutes of “Electra Woman…,” the main characters have dropped pop culture references to both Tumblr and Snapchat. 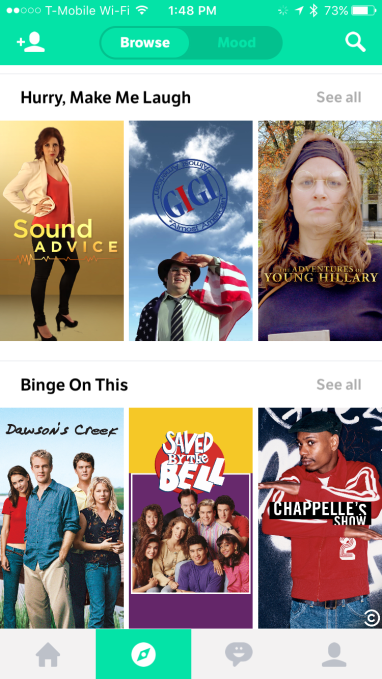 Plus, the app cheekily organizes its content into sections whose titles reference the way teen and young adults watch videos today. That is, if they’re not watching a few-minute short piece of content on their mobile, then they’re spending hours bingeing their way through a multi-season series.

Fullscreen’s app almost too-cleverly calls this out, with sections like “I’ve Got Like 10 Min,” “Hurry, Make Me Laugh,” or “Binge On This.”

Other section titles are also written as if penned by teens who don’t give AF.

In fact, one featuring dramas is actually called “Dark AF.” Other sections include “Girls Run the World,” where you’ll find everything from “Daria” to Beyoncé, “Romance Me,” “LMFAO,” “How Dramatic,” and more.

And if you don’t want to browse by section, you can pick a show based on mood by selecting whether you want to “snack” or “binge” and then how you want to feel (e.g.”laughing till it hurts,” “getting weird,” etc.) 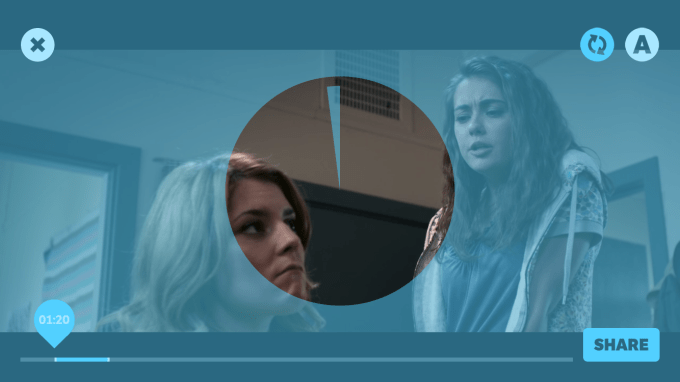 Not Just Video, A Social Platform

One of Fullscreen’s defining features is its in-app video player, which offers a button that, when tapped, lets you create GIFs that you can add captions to then share across social networks, including Twitter, Facebook, and Tumblr.

This GIF-making function is amazingly simple to use. It’s clever too – making and sharing GIFs of TV shows and movies is a popular way that today’s young adults socialize around content, and Fullscreen has made this activity a core part to its streaming service.

In addition, a social section in the app lets you follow other people’s GIFs, where you can flip between streams of the most popular items and those that were just created. You can grab these GIFs, too, and share them with your networks. And you can give them a Facebook-like “thumbs up” or leave a comment. 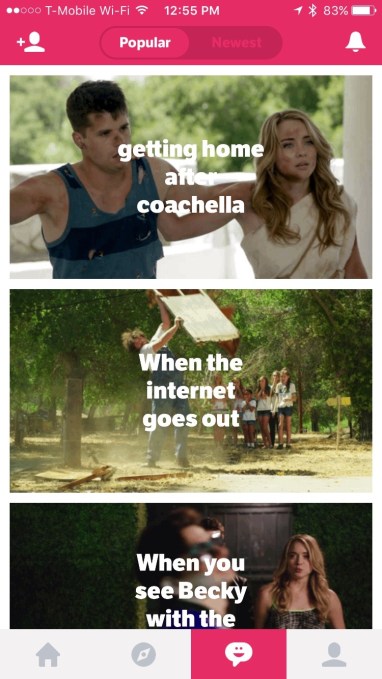 Like everything else on Fullscreen, the GIFs speak to the young audience on the app with jokes about Coachella, Tinder, internet outages, “Becky with the good hair,” Uber, texting and finals.

Yep, this isn’t your mom’s Netflix over here. And that’s the point.

According to comments from Fullscreen CEO George Strompolos, the goal with Fullscreen is to function as something like an MTV for today’s generation, who grew up watching online video, not traditional TV.

Fullscreen is owned by Otter Media, a joint venture between AT&T and Chernin Group, and represents AT&T’s attempt to enter the mobile video market. AT&T will not only help to distribute the app to its subscribers, it’s also co-producing premium content for the service.

That makes Fullscreen a competitor to [TechCrunch parent] Verizon’s newly launched go90 mobile video service. But the biggest differentiator here is the fact that go90 is ad-supported instead of paid. But similar to AT&T’s strategic partnership with Fullscreen, Verizon has also taken its own stake in rival media network AwesomenessTV to flesh out its own exclusive, original content.

Comcast also has its stakes in the streaming market with its mobile-friendly, over-the-top service Stream, NBCU’s comedy-focused SeeSo, and its own YouTube wannabe Watchable.

The question now is how many of these niche competitors the market has room for under Netflix, Amazon and YouTube’s shadow.

At a press event earlier this week, Fullscreen COO Andy Forssell said the company believes it can reach 5 million subscribers, The WSJ reported, but it didn’t offer a time frame as to when it expects to meet that goal.