Tinder announced this morning it’s testing a new friend-finding feature called “Tinder Social” in its popular dating app. The idea is to offer a way for you and your group of friends to find and connect with other groups out in the real world. Similar to how Tinder works for finding prospective dates, Tinder Social lets friends swipe and match with other groups they want to meet. Unfortunately, Tinder users who are being opted into this feature by default are surprised to find that it automatically displays which of their Facebook friends are also using Tinder – information not everyone wants revealed.

Of course, you may run across at least some of those friends while actually using the app. But Tinder Social presents a list of all your Facebook friends and lets you view their dating profiles from a very accessible interface. Yikes.

Not everyone is thrilled about that, it seems. Especially those who might be using Tinder…you know, on the side….

Plus, some others seem to think that a “group” option on Tinder means the app now wants to help you find group sex. (That’s not a huge leap, after all – there’s already a “Tinder for threesomes” called 3nder out there.) 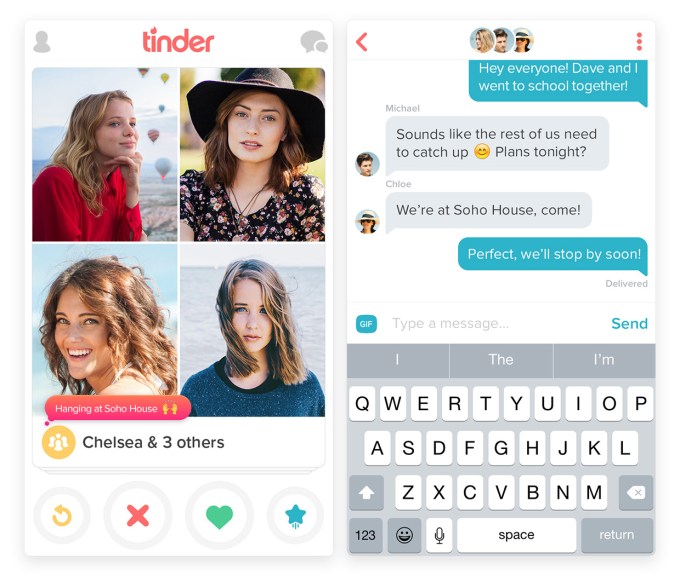 The good news is that Tinder is still experimenting with this new feature for now, and is only testing it with a small group of users in Australia. So you’re probably safe from being exposed for the time being.

The problem with Tinder Social is somewhat of an odd oversight for the app, which has before touted its privacy features as one of its selling points. For example, its App Store description promotes the fact that “no one knows” whether you swiped left or right unless you match, and the app will never post anything to Facebook.

But it’s not surprising to see Tinder moving into the “friend-finding” space.

After all, the idea for finding dates in a group setting is not new. Many dating companies host local meetups, and some dating startups like Grouper, for instance, have attempted to productize the idea of the group date.

In addition, friend-finding is an untapped area for social networking apps.

A number of startups over the years have tried various tricks to help users meet new people out in the real world, but none ever really made it. Several location-based social apps, like Highlight, experienced brief popularity many years ago, but they didn’t prove to have staying power.

Meanwhile, a new batch of startups today are developing their own take on “Tinder for finding friends.”

And most notably, one of Tinder’s top competitors Bumble, founded by early Tinder employees including Whitney Wolfe (yes, she of the sexual harassment lawsuit), also recently launched a friend-finding function. However, in Bumble’s case, it’s about connecting individuals, not groups.

Tinder, however, has a sizable enough user base – an estimated 50 million+ users – to make such a feature really take off.

(Well, unless Tinder’s users shut down their accounts and delete the app because they don’t want their Tinder usage and dating profile revealed, I suppose!)

The solution for the Tinder Social problem is easy enough to fix, though. It’s a matter of adjusting a setting. The feature is currently opt-out instead of opt-in – that is, you can disable it from the app’s Settings screen. Clearly, Tinder needs to make a change to how this is enabled or risk alienating a portion of its user base before it rolls this out more broadly.

The company didn’t say when it plans to bring Tinder Social to other markets – only that it will launch globally “soon.”