Pan-European train travel booking website Loco2 has launched its first smartphone app, letting iOS users book and pay for trips via a dedicated app. Launching an Android app is also on its roadmap for this year.

The London-based site, which was founded all the way back in 2006 and was one of the first European travel startups to gain access to major train company booking systems, now has more than 120,000 paying customers, according to co-founder Jamie Andrews. (It does not break out an active user metric as it does not require users to register in order to make a booking.)

“We made well over £10m of sales in 2015,” he tells TechCrunch. “[We] took the decision in July to raise further investment rather than go for profitability at this stage. We’ve subsequently expanded our team and marketing efforts — for example we just launched an advertising campaign on the London Underground.”

While he says France was Loco2’s best market by far initially — unsurprisingly so, given the country’s size and investment in high speed rail infrastructure — Andrews says growth is coming from more areas now.

“Spain and Italy have grown strongly since the beginning of last summer,” he says. “Recently we’ve seen a big increase in UK sales, demonstrating the appetite amongst our users for domestic UK bookings, and in part providing the rationale for developing mobile applications.”

It may seem an oddity that a digital business with so many years’ operation under its belt is only now getting around to launching apps but given the complexity of hooking together multiple European train companies on a single booking platform, Loco2’s initial focus was on fundamentals like securing access to real-time train data and integrating with operators’ booking systems. tl;dr pan-European rail booking platforms are not built in a day.

“Following the launch of our Trenitalia integration last year we now have the ‘big five’ in Western Europe (UK, France, Germany, Spain, Italy) so our geographical coverage is largely complete,” he notes, adding: “We’ve also doubled the size of our tech team in the last nine months, so have been able to focus on mobile/UX in addition to ongoing improvements to the back-end.”

In terms of user demand for mobile, Andrews says Loco2 has been seeing a substantial increase in the number of people booking domestic trains via its platform – which in turn has made having a mobile app more of an imperative.

“A year ago 95 per cent of customers were booking trains outside of their home country; this has now dropped to closer to 70 per cent outside of peak holiday-booking season, demonstrating that users want to use Loco2 for all their train travel not just their holidays,” he says. “Domestic bookings are much more frequent and more suited to apps.”

Last month almost a third (31 per cent) of Loco2 sessions were booked via its mobile site. “We expect mobile to increase now that we have an app and are catering more to the domestic travel market,” he adds.

Interestingly, while the Loco2 founders’ raison d’etre for launching the business was to simplify booking and routing challenges involved in specifically planning long distance train travel across Europe, Andrews does not rule out adding additional modes of transport in future – “if we see demand for that”.

There are now multiple multi-modal travel booking startups operating in the region, such as GoEuro and Rome2Rio, aiming to serve demand and grow usage by combining transport options to offer people more choice on routes, timings and price. Loco2 has stuck steadfastly to rails so far, although it has also inked a partnership with multi-modal player Rome2Rio.

Meanwhile, other travel startups, such as car sharing platform blablacar, are also bringing private transport options into the European travel planning mix, to further expand the ways and means  travelers can use to carry out a trip — while also, inexorably, expanding the competitive mix. The prices of long distance trips on blablacar are typically far cheaper than the cost of traveling by rail (although trips may well also take far longer).

Discussing the competitive landscape, Andrews names KKR-owned Trainline, which recently acquired French train booking platform Captain Train, as its main rival but flags up that Loco2 does not take booking or payment card fees from users, unlike Trainline. He also name-checks GoEuro as a rival, at least in part. But goes on to say he is confident Loco2 has superior routing options vs its main competitors — thanks to greater market reach (such as covering Spain’s rail network).

“Loco2 excels at genuine pan-European travel thanks to the big investments we’ve made in routing — Loco2 returns results for searches like Edinburgh-Milan or Cologne-Madrid. Despite the funding and acquisition fanfare, both Trainline and GoEuro fail at such itineraries, and no-one else in the market comes close,” he argues.

Loco2 raised a further £670k in angel investment back in July 2015, although its funding levels are far more modest than others in the space — with only around £1 million in seed funding raised from business angels prior to its last raise. Whereas GoEuro, for example, pulled in a $45 million Series B back in December, led by Goldman Sachs.

Andrews says Loco2 is now considering taking in more from investment to continue to grow the business — including by expanding into new markets. “We could choose to head for breakeven now but we don’t want to throttle our considerable growth potential, so we’re currently looking at possible VC/private equity options,” he says.

The advantage of being an early digital mover in a very traditional industry, which required securing hard-won agreements with slow-moving rail companies to access data and booking systems, is likely to count for less as other startups who came later to the market benefit from a more general opening up of core systems. So Loco2 will likely need to accelerate its product focus — such as by adding mobile apps — to keep being able to claim advantages over better resourced rivals.

There’s certainly little doubt the market is heating up now that it’s been opened up, and competition is going to get increasingly fierce — even if more people are tempted to book more European trips online. 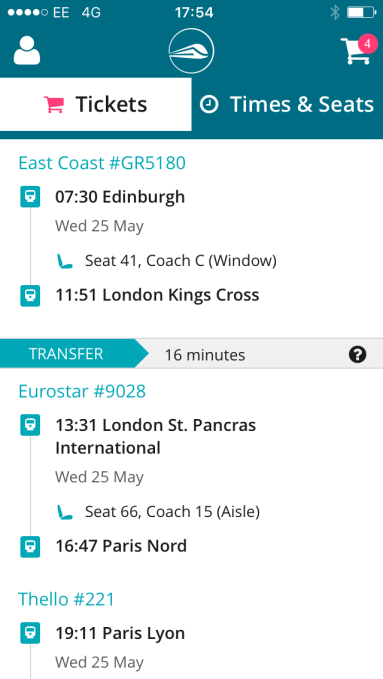 One Loco2 feature Andrews flags up as a personal favorite is a times/seats overview enabling users who are booking complex travel itinerary to get an easy overview of “sophisticated journeys spanning multiple rail operators” at the point of purchase (pictured right) .

As well as aiming to smooth out travel planning wrinkles for its users, Andrews dubs customer service as a big priority for the business, with Loco2 — for instance — applying for compensation on behalf of users who book via its platform and go on to experience train delays.

(On customer service generally, he points to the site achieving an average rating of 9.2/10 on Trustpilot after over 8,000 reviews — asserting this is “a claim that cannot be made by anyone else in the market”.)

In terms of growth potential from here on in, he says Loco2 is eyeing selling more tickets for European rail trips to people who live outside the region. While, within Europe, he notes there are some key national rail operators outside the five countries it covers that have not yet released APIs for third parties to integrate with.

“We would love to work more closely with these rail operators to help them open up new sales channels,” he adds.