Today’s VR headsets are marvels of miniaturization. And, as iFixit’s teardowns show, both the Oculus Rift and HTC’s Vive are also remarkably user-friendly when it comes to repair and customization.

Today’s teardown of the Vive doesn’t have quite the novelty of the one conducted on the Oculus headset, but it’s still interesting for anyone who likes to see how the sausage is made (and displayed). Although few will get much of a thrill out of the Vive-specific motion control chips and microcontrollers, there are other, more significant differences between the two flagship headsets.

Most relevant is the room-level motion tracking system. The Oculus headset, as you may know, is studded with infrared LEDs that are tracked by a system of cameras. The Vive flips the script, with the detectors in the headset and the IR pattern being blasted out by a pair of laser-spewing “Lighthouses.”

This reversed tracking technique (or perhaps it is Oculus that is reversed) has advantages, but also disadvantages — not least of which is needing to house the electronics necessary to run a set of 32 IR detectors rather than just LEDs. 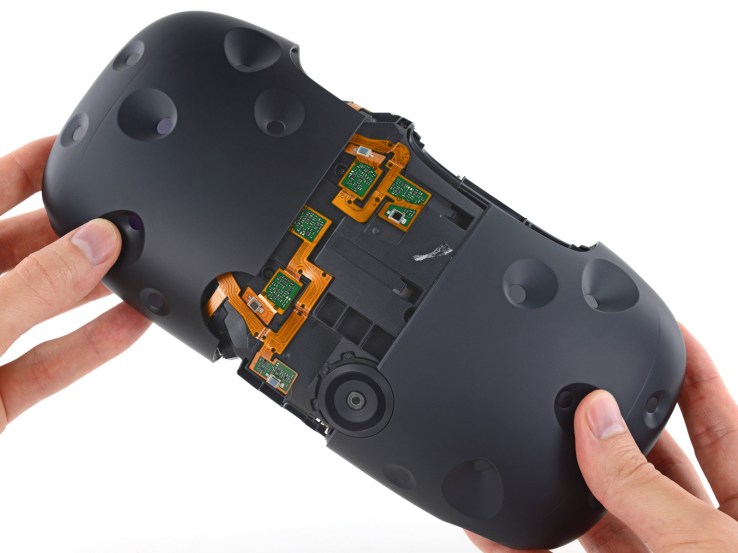 Each IR sensor has its own tiny, tiny board it sits on.

When you’re as weight- and space-limited as the designers were for these headsets, that’s a significant consideration. Needless to say, HTC and Valve’s engineers rose to the occasion, however, as the Vive is just as, if not more light and comfortable than the Oculus.

iFixit notes that the whole headset can be disassembled with pretty basic tools and without any irreversible damage like snipping ribbons or breaking seals. That’s good news, because early adopters are definitely the type to take things apart and mod them. Expect to see some crazy battery packs, adjustments for hardcore glasses wearers, and so on.