Automaker Jaguar Land Rover Ltd. today announced a partnership with Silicon Valley startup Tile Inc. to prevent drivers from leaving home, or any other place, without their essential personal items.

Tile, which has raised $16 million in total venture funding to-date, makes small, waterproof tags that employ Bluetooth low-energy radio and GPS technology to locate objects to which they are affixed.

According to Tile CEO and co-founder Mike Farley, the company has shipped more than 5 million of its tags to customers so far, who often buy four at a time.

Tile sales hit $43 million in 2015, he said, and the company expects to double that this year at least. Apple, Best Buy, Lowe’s and T-mobile stores are among retailers selling Tile.

When users lose track of something that’s tagged with a Tile, they can fire up the company’s mobile app to see if the item is within about a 100-foot range. If yes, they can make the Tile beep to guide them to items hidden from plain view.

That feature could help drivers locate an item that may have fallen under a car seat, or that were forgotten after stowage in a glove box. 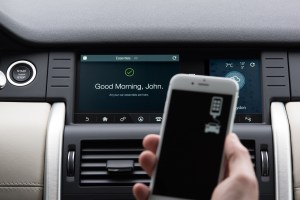 A Land Rover driver uses the Tile mobile app to check for essential items before departing.

But more importantly, given its new partnership with Jaguar Land Rover, the Tile app will be featured on the “InControl Apps” menu on the 2017 Land Rover Discovery Sport, a premium compact SUV.

That’s a coveted position for an in-car app. The automaker only features about a dozen apps on its touchscreen system, including navigation and music apps.

According to Cross Car Product and Strategy Manager for Jaguar Land Rover, Tim Phillipo, drivers will be able to set up a list of essential items and check it, every time they get into their vehicles, using Tile via the company’s InControl Apps system.

Phillipo said for now customers will have to fire up the Tile app proactively to see if they’re missing anything before they drive away. But, he said, “In the next phase, you will get in your car, and when you plug in your phone, it will tell you if you don’t have something from your essentials list with you.”

The partnership marks the first such engagement for Tile, Farley said. It is non-exclusive, and Tile is hoping to become part of the app layer in the connected cars market, more broadly.

Competitors like TrackR and newcomers like Trakkies may try to follow suit. But it remains to be seen how much integrations will drive sales or engagement for makers of tags that bring locate-ability to everyday objects.