Mandatory drone registration and a massive national database of drone owners is already under way in the U.S. But simply knowing who owns what won’t stop unmanned aerial vehicles from collisions or becoming a public nuisance.

A Raleigh, North Carolina company called PrecisionHawk Inc. has raised $18 million in a Series C round of venture funding to help companies use drones for different commercial purposes in the United States, without getting into airspace where they can’t fly safely or legally.

According to PrecisionHawk CEO Bob Young, formerly the CEO of open source software firm Red Hat Inc., the startup wants to become the top provider of data and safety services for the commercial drone industry.

Founded in Canada in 2010, PrecisionHawk was known earlier in its life as the maker of the Lancaster fixed-wing drones for farmers. Lancaster drones gathers aerial data about a farmers’ land and crops over time, using any sensors the farmer wants to install, whether that’s visual, thermal or lidar sensors. 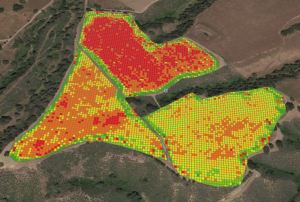 For farmers, drone-gathered data yields heat maps and other visualizations that can guide them to irrigate only where moisture is needed, or apply pesticides, fertilizers or herbicides precisely too.

PrecisionHawk’s DataMapper service lets users upload data they’ve gathered using drones from any manufacturer, store it in the cloud, manage and analyze that data, and apply algorithms from the DataMapper marketplace to gain different insights from it.

A freemium version of DataMapper is available, but PrecisionHawk now charges $95 per month for a premium “platinum” account where users can store and analyze up to 750 gigabytes of their aerial data.

The company is also developing and testing an air traffic control system to usher commercial and consumer drones safely into U.S. airspace, working in partnership with the U.S. Federal Aviation Administration, NASA and private sector partners including Verizon, Digital Globe and Harris.

PrecisionHawk’s LATAS or Low Altitude Traffic and Airspace Safety system, lets drone operators basically get clearance to fly, track and verify their own flight operations and report their flight paths back to the FAA without a lot of fuss.

LATAS also gives pilots a tool to identify hazards on the ground or in the air, and social sharing and live-streaming capabilities, as well.

Given the funding, PrecisionHawk will expand within and beyond the commercial agriculture business, into different sectors including: oil and gas, mining and geology, insurance, search and rescue, forestry and telecommunications.

In 2015, drone tech investments broke records, thanks in part to mammoth rounds going to hardware manufacturers in the sector including E-Hang, 3DRobotics, CyPhy Works and others.

Most notably, SZ DJI Technology Co. Ltd.  in Shenzhen, the company that makes the Phantom line of UAVs, raised $575 million in two rounds of venture funding.

More deals, if not dollars, will be seen around software and services companies in 2016, now that a number of hardware players are well-established, predicted Kellerman.