Apple’s single-port-wonder MacBook gets a mid-season upgrade today with faster processors, better graphics, faster internal memory and an hour more of battery life today. You can also get Apple’s Rose Gold finish on a Mac for the first time ever, if that’s your sort of thing.

The technical nuts of it are that the MacBook can now be ordered with dual-core Intel M processors at up to 1.3GHz with 1866 MHz memory, Intel HD Graphics 515 with a claimed 25% faster graphics performance and faster internal storage. The new guts are getting you better performance but also better battery life with what Apple says is 10 hours of web browsing or 11 hours of iTunes movie playback. 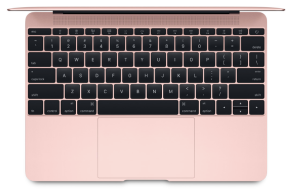 This is a minor but nice mid-stride update to the MacBook lineup that features Intel’s ‘sixth generation Core M’ processors, also known as Skylake. Many folks have been waiting for Skylake processors to make their appearance in Apple laptops and this is the tip of it. Other models are sure to come.

The color is gorgeous on the new iPads so if you’re hankering for the Rose Gold then you’re in luck. The bumping of the minimum amount of RAM in the laptop should do well to quell one complaint of early adopters (including me) in that the base models tend to chug a bit with a bunch of Chrome tabs open or while doing memory intensive video or audio editing.

Not a situation where current MacBook owners should be looking to move, but definitely a nice ‘revision two’ model for people who have been on the brink to look at. Apple’s v2 products have a very long history of being better in a lot of small ways that don’t make it onto spec sheets. Tiny fiddly changes in the way they’re put together or the components that Apple is using reflect the months of learning and support tickets they have to call upon for research over the past months.