OneWeb Satellites, the joint venture between OneWeb LLC and Airbus Defense and Space, has selected Florida to be the home of their satellite manufacturing facility. Located in Exploration Park near NASA’s Kennedy Space Center, the factory will turn out most of OneWeb’s 900 satellites that will be used to provide global Internet coverage.

Under a partnership between the State of Florida and Space Florida, OneWeb Satellites will invest about $80 million into the manufacturing facility. As part of the deal, the Florida Department of Transportation will match $17.5 million worth for the development of the plant itself during the construction phase.

According to the International Telecommunication Union, due to challenges with the way Internet is provided today, 57 percent of the world still does not have reliable access to the World Wide Web.

OneWeb founder Greg Wyler has worked to increase that percentage throughout much of his professional career. In his earlier pursuits, Wyler created Terracom, which helped bring fiber-based Internet to Rwanda, and O3b Networks, which provides Internet to a large portion of the globe through satellites in Medium Earth Orbit (MEO).

OneWeb is Wyler’s most ambitious Internet company to date. Placing a satellite constellation in Low Earth Orbit reduces latency issues (time it takes for data to travel to a satellite and back to the user, important for streaming applications or gaming) and, with enough satellites, can provide true global coverage.

To achieve this, OneWeb’s initial constellation will require more than 50 times the number of satellites than O3b’s MEO constellation.

All of this means that before OneWeb can launch the largest satellite constellation in history, they’ll need to start by becoming the first company to mass-produce spacecraft. In addition to those required for OneWeb’s constellation, the factory could also manufacture satellites designed to meet other specifications for other customers.

With that in mind, all eyes will be on OneWeb Satellites’ new 100,000+ square-foot Florida facility, the industry’s first satellite factory designed to mass-produce large spacecraft using assembly-line techniques similar to those used in aircraft production.

The factory is expected to create 250 new engineering jobs and will ultimately manufacture 15 satellites a week. 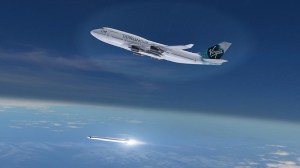 To bring the satellites to orbit, OneWeb had to sign the largest commercial rocket deal in history. Arianespace will cover at least 21 launches with the Russian-made Soyuz rocket, which can carry up to 36 satellites at a time. Virgin Galactic’s LauncherOne vehicle, which is still in development, will cover 39 launches with 1 satellite on board at a time.

Wyler’s ambitious goal to bring low-latency, broadband Internet to the entire world has required a number of historic partnerships and firsts for the space industry. The ambitious Florida-based satellite factory is their latest important step toward that goal.

There are still many challenges to overcome, but if all goes well, OneWeb Internet could come online as early as 2019.