A new application called Sorted launches today to offer a better, faster and more efficient way to manage your tasks via your mobile phone. Yes, it’s another To Do list application. Do we really need such a thing? The answer to that question may be subjective, but a small team of developers in Hong Kong believes there’s room for another app in this space to carve out its own following. They’ve even patented some multi-touch gestures aimed at making working with tasks quicker than before, they said.

For starters, the Sorted application may only have niche appeal. It’s not really designed for the occasional list maker, but rather for someone who regularly has to juggle a number of tasks throughout the day.

The app began as a personal project by Mind Fund Studio’s CTO Leo Tumwattana,, who says he struggled with keeping up with tasks and requests that continually change. A follower of the “GTD” (get things done) model, he couldn’t find the right app for his own needs, despite the many options in the App Store.

Mind Fund Studio, for those unfamiliar, is a studio backed by Hong Kong VC fund Mind Fund, early investors in Flipagram. The studio has five developers, and had put out a few applications to date, but Sorted is the most polished and high-profile of the lot.

The goal with Sorted is to address problems where other calendaring and to-do list apps fall short. These applications on the desktop and on mobile both have their advantages for booking chunks of time, but don’t work well at rescheduling a group of tasks.

When that happens, you must go through each task one-by-one and assign it a new date and/or time. The idea with Sorted is to allow you to quickly select a group of tasks using a swipe, then move them ahead to a different day or time.

The concept here is actually based on the tickler filing system, the company explains — meaning you can move your to-do items to the day you should be reminded about them. And if you can’t get to a series of these tasks at a given time, you can quickly drag your finger across a group of them and move them around.

To do so, tap on the bell icon to the left of the task itself, then drag your finger on the screen to change the time. You can also tap the bottom of the screen to access the calendar to move it to a different date. (It’s easier to try this yourself rather than have it explained to you.)

The app also does away with date pickers and forms. When you create a task, you can simply enter the description. 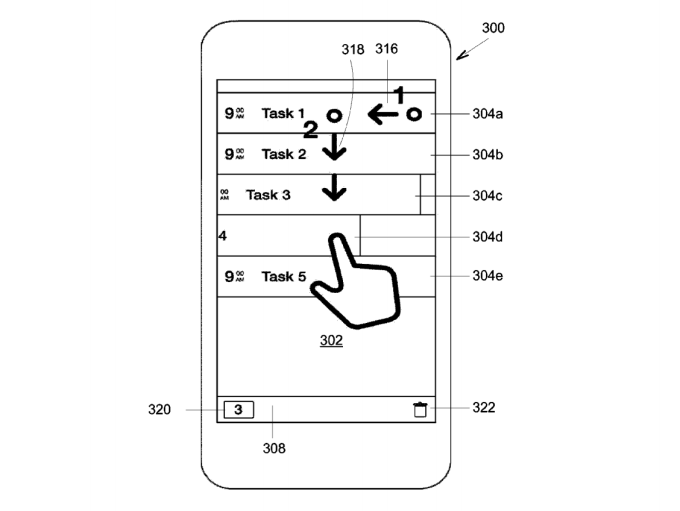 To some extent, the process of task creation reminds me of an older to-do list app called Clear, which was once buzzed about for its then-unusual and innovative use of gestures. (Sorted’s team, meanwhile, has patented a way to multi-select tasks with one swipe gesture).

“We think Clear is great,” admits Mind Fund Studio’s CMO Charlie Morris. “But the big thing about Clear is that it doesn’t have scheduling.”

Tumwattana had wanted something like Clear, says Morris, but something that not only offered scheduling but also made it easier to schedule things using gestures.

The problem with Clear, however, is the same one that Sorted will face.

Because it introduces so many unique gestures, it simply can’t aim for a mainstream, more casual audience. There’s definitely a learning curve to using Sorted (as there was with Clear). If you’re a power user who’s in the app several times per day, then Sorted could improve the speed with which you manage your tasks.

However, if you only sometimes use to-do lists, then you might forget in between sessions how Sorted’s interface works, and all its many hidden tricks — like how you can label selected reminders by using a particular swipe motion, how you swipe to complete a list or delete a list, how to swipe to create checklists and so much more.

Sorted can help you jog your memory by offering a detailed help section with these answers — and it even includes handy videos of how to perform each action.

Still, there’s something to be said for an app that’s more intuitive than it is clever.

That being said, for power users who invest the time in learning Sorted, it could become one of those must-haves for your iPhone. During early beta test, it seems that’s the audience who will become addicted to this. Of some 200 beta testers ahead of today’s launch, many dropped out. But some 30 remained and became hardcore users.

The app is $1.99 in the App Store today, but it will increase to $3.99 next week. A Mac version will launch into beta in a week, and longer term the company is considering moving into the team collaboration space.