While Amazon, Google and a number of startups like Instacart, Postmates, Shipt and others are focused on quick, same-day deliveries of groceries and household items, Walmart has been taking a different approach. It has instead tapped into its large brick-and-mortar footprint to roll out curbside grocery pickup in a number of locations across the U.S., allowing customers to shop online or on mobile, then pull up at their local store to grab their order.

Today, the retailer is announcing an expansion of this service to a number of new markets, as well as a doubling of store pickup locations in several of its larger, established markets.

With the additions, Walmart’s grocery pickup service will be live in over 30 markets. (You can see a further list of supported regions here). This gives the retailing giant a competitive angle to counter the often pricier online grocery delivery services.

Also worth noting is that, with curbside pickup, Walmart has been able to target smaller to mid-size markets where grocery delivery hasn’t yet rolled out, in many cases. That’s because the economics of same-day delivery – and especially one-hour deliveries, as with Amazon Prime Now – require these services to focus on denser, urban markets. Meanwhile, as of last year, a Walmart store was said to be located within 5 miles of 70 percent of the U.S. population. (Walmart says this number hasn’t changed, despite store closings in January).

Walmart’s grocery pickup service is also more heavily used by women, company execs previously said. That means that it tends to cater to the mom-on-the-go type, who’s out running errands with kids and wants to save time by not having to exit her car.

In terms of the service’s offering itself – that has not changed since last year. There are still around 30,000 SKUs available for curbside pickup, which is comparable to what you would find in the store. The list includes both grocery items and common household goods. Prices are also the same as in-store, and there are no additional fees. This addresses one of the larger concerns among Walmart’s core demographic, who may be more concerned with cost than convenience.

Customers are able to shop online throughout the week, adding items to their cart. Or they can create a quick order via the Walmart mobile app. When their cart is full, they can pick a time slot for their pickup then park in designated spaces at their local store. Orders placed by 10 AM can be picked up same day. 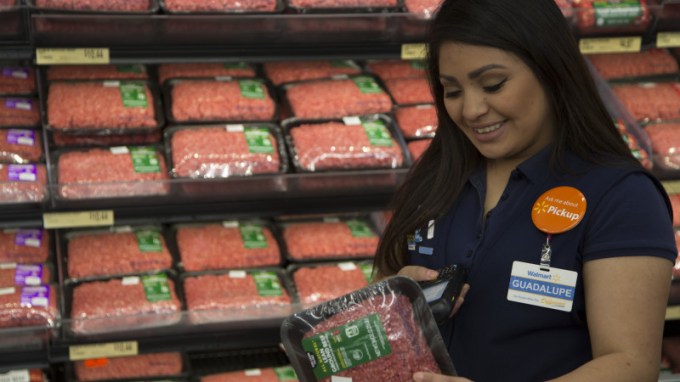 While Walmart hasn’t said how many customers are today using grocery pickup, or what order volume is like, it does have a loyal customer base, the retailer reports.

90 percent of customers are repeat users, and they are primarily using it for fresh groceries, not general merchandise. This is the first time Walmart has attached a figure to its grocery pickup business, as before it would only say that customer adoption was accelerating as it launched in each new market.

In addition, Walmart says that 90 percent of online baskets contain fresh items, like dairy, meat and produce. This speaks to one of the issues both delivery and pickup services face – picking the right items. One of the advantages to shopping for yourself is being able to hand-select the right produce or cuts of meat, for example. That’s one reason why delivery service Instacart put their in-store shoppers on payroll – so they can be properly trained on how to pick items correctly.

Walmart’s personal shoppers are also employees. The company also reports that customer satisfaction scores are in the mid to high 90’s.

Walmart says the new markets and expansions will come online this month, ahead of several more expansions to new locations planned for 2016.