Today, GIFs have become a popular way communicate sentiment online and in mobile messaging, where written text doesn’t always do the job. More expressive than an emoji, these looping images let you share a specific thought or feeling with little effort. But today, a new app is launching to see if video can step in where GIFs leave off, by allowing for a different means of expression. The app, rather generically called “A Video Meme App,” lets you take a short video clip, add your own caption, then share.

The idea for A Video Meme App comes from two college friends, Jake Ferrin and Chris Weinberger, who met while playing lacrosse at BYU. Explains Ferrin, they both found themselves referencing movies and YouTube videos in their digital conversations.

“How we talked was in quoting videos,” says Ferrin.

They initially came up with an idea to build a website and app that would allow users to search for videos, trim them, then share them in conversations. However, this app ran into a roadblock with Apple’s App Store because it involved downloading content in order to allow for the video trimming feature. (You can still trim videos on the web, however. And many users continue to use the prior application to fill out this one’s content library with their truncated clips.)

With the newly launched app, trimming videos is no longer an issue. Instead of requiring users to do their own video edits – something not all the app’s prior user base was doing anyway – you can now just search for videos, add your own captions, then share them as you see fit.

The app itself is straightforward to use, and you don’t have to create an account to get started. After launching it for the first time, a feed of featured videos will display. This is an editorially selected group of around 20 or so clips with captions that you can immediately view and share. 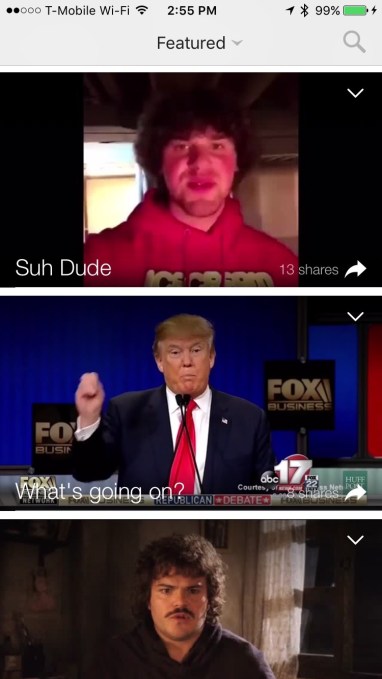 For example, today, there’s a clip of the genie from “Aladdin” turning himself into a sheep with the caption, “Well I feel sheepish.” Another features a string of Donald Trump clips in which he repeatedly asks “What’s going on?”

Elsewhere in the app, you can browse the latest videos, the full library of some 5,000 clips, or you can browse categories like “Excited,” “Love,” “LOL,” “Angry,” etc.

Videos are shared in MP4 format, which is why iMessage and Messenger are promoted more heavily. On those platforms, they will play in-line.

You can also save your creations to your Camera Roll for posting on other networks, like Instagram.

Essentially, these annotated videos serve the same purpose as a GIF – they let you use media as a means of expression. However, there isn’t really an app that lets you do this today.

Vine, guesses Ferrin, would be the closest competitor to A Video Meme app, as its users will sometimes record the TV screen to show what they’re watching then add a Vine caption.

“But [these Vine videos are] not searchable – no one can find that or use it again,” he says. “As far as competitors, I don’t know if there’s anyone who’s doing exactly what we’re doing.”

Now the test is to see whether captioning and sharing videos is something that people actually want to do, and if there’s room for this form of expression in a world where GIFs already dominate.

A Video Meme App is a free download on the iTunes App Store.