It is a little over two weeks since online take-out behemoth Delivery Hero announced that it was shuttering Valk Fleet, its food delivery and logistics startup that let quick service restaurants outsource delivery.

Since then, and amidst claims by both contract drivers and staff that they are owed money, Valk Fleet UK has put itself into ‘administration‘ — a voluntary process in the UK when a company has incurred debt that it is unlikely to be able to service.

Related to this, a number of Valk Fleet’s management team tell TechCrunch they have been on the receiving end of “death threats” from disgruntled drivers who, due to their self-employed status, have no employment rights beyond the contract they signed with Valk Feet. This is what the ugly face of the so-called ‘gig economy’ looks like.

Scott Fletcher, a member of Delivery Hero’s management team, confirmed that ex-Valk Fleet staff have received threats and says that the police have been informed. “They were largely directed at the head office staff and management,” he says, pointing out that those staff are also affected by Valk Fleet UK being put into administration and do not receive different treatment in terms of any money owed.

“When the company was put into administration, there were outstanding payments to both drivers and staff,” adds Fletcher. “All payments were frozen by the administrator”. He also reveals that there was a “very large amount of capital” in Valk Fleet’s bank account when administrators were called in.

How far that capital will go to cover the startup’s debts and liabilities remains to be seen. Creditors, including ex-drivers and staff, will need to put in a claim and wait patiently in line to be compensated. A meeting hosted by Valk Fleet’s administrators is due to be held on 7th of April.

Grow at any cost

Meanwhile, via multiple sources who previously worked at the startup, a picture has emerged of a company charged with scaling extremely fast, and with a burn-rate that at one point in time included a monthly wage bill in the UK of almost £700,000. “Grow at any cost,” is a phrase cited by numerous ex-members of staff I’ve talked to, a directive that is said to have come from the very top of Valk Fleet.

And grow the one year-old company did. At its peak, Valk Fleet UK was delivering 100,000 monthly orders, and had secured a key account in the form of Burger King, which sources tell me rolled out to over 40 Burger King franchisees with plans to reach 200.

“The team did a fantastic job but despite good volume in some cities and one of the most advanced logistic systems in the industry, we came to realise that we won’t reach acceptable economics,” says Fletcher, who oversaw Valk Fleet on behalf of parent company Delivery Hero but wasn’t responsible for daily business operations (that was left to Valk Fleet’s Global CEO Lukas Uhl, in addition to various country managers). “Restaurants have very specific demands that make food delivery very challenging,” he says.

The question of why Valk Fleet was unable to reach “acceptable economics” is likely to be debated for months if not years to come, as we witness the beginnings of a fall out in the on-demand delivery space.

Regards to Valk Fleet in the UK, two different schools of thought emerge. Either the economics specific to Valk Fleet’s overall model are unworkable and in hindsight always were — margins are so low that there isn’t a viable business in having quick service restaurants (QSRs) outsource delivery — or Valk Fleet UK simply struggled to execute.

The official line from parent company Delivery Hero is that the business model doesn’t work, a view echoed by Fletcher. “Restaurants did not want to pay what it costs to run this service on a revenue level,” he says.

However, sources within the company, who spoke to TechCrunch on the condition of anonymity, still believe that Valk Fleet UK could have been made viable. They say that although the majority of staff were aware or suspected that Valk Fleet was spending far more than it was bringing in and that in its current form the model was untenable, after a productivity drive in December, metrics began to improve.

This saw a change in terms and conditions and the formula for how drivers were paid, and, crucially, a narrowing of the delivery zones covered by Valk Fleet to increase the density of orders, which was a key issue related to the startup’s low productivity.

Other reasons for failure cited include severe overstaffing — meaning driver supply often outstripped demand, resulting in a low number of deliveries per hour per driver — and the amount and formula used to charge restaurants. For example, unlike Deliveroo or Jinn, which charge a delivery fee plus a percentage of the overall basket, Valk Fleet relied on a low flat delivery fee only. 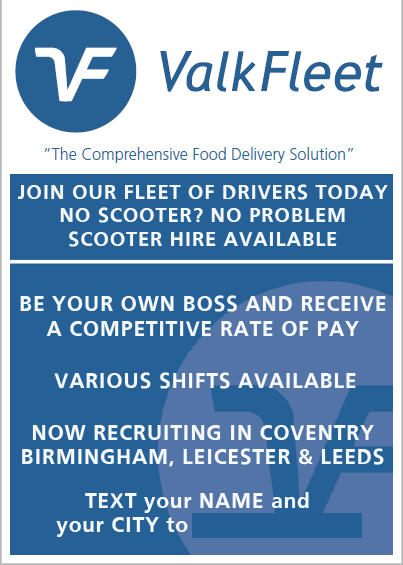 Sources also talk of high spending for things like travel and leasing numerous company cars for use by senior management and the sales team. They included multiple Ford Focus and Ford Fiesta models and at least one Mercedes.

I’m also told that although the majority of Valk Fleet drivers supplied their own vehicles, the UK company had a number of its own scooters too. A flyer posted to LinkedIn by Valk Fleet suggests they were available for hire to drivers without transportation. Smartphones, powerpacks and SIM cards, and other basic supplies, such as uniforms, were also provided to contract drivers.

Another issue seems to have been a lack of logistics experience amongst key staff at Valk Fleet UK. One source spoke of a company culture dominated by sales people, while another says that staff were sometimes promoted too quickly.

And while Valk Fleet was undoubtedly very successful at signing up restaurants, it wasn’t so proficient in collecting money owed. That’s because, says Fletcher, on a cash flow level, Valk Fleet didn’t control the money coming into restaurants — remember, unlike Delivery Hero’s Foodora, the service was B2B not consumer-facing — and this meant that it was “operationally complex” to get them to pay on time. This resulted in the company’s revenue being lower than it should have been.

Here are a number of other tidbits I’ve learned in researching this story, some of which will likely make for compelling reading for other startups operating in the on-demand delivery space:

Finally, we should spare a thought for the restaurants that ditched their own delivery drivers in favour of using Valk Fleet UK, many of whom will have learned of the startup’s closing at extremely short notice and may have had to suspend their delivery service as a result.

As one Valk Fleet manager told me, when restaurant owners first heard the Valk Fleet pitch the general consensus was that the well-funded startup had arrived to “answer all of their prayers”. That’s because the recruitment and retention of drivers is a real pain-point for small independent quick service restaurants.

What those restaurants probably never considered is that within just a year, Valk Fleet’s parent company Delivery Hero would pull the plug.