A propaganda application developed by the Islamist fundamentalist group the Taliban was live on the Google Play store for two days before being booted, raising questions about Google’s app review process, which today includes a combination of human editors and algorithms. The app’s content, written in the Pashto language, included statements and videos from the Taliban, which confirmed to Bloomberg it was behind the app’s creation.

The app was first spotted by a U.S. organization called Site Intel Group, which monitors jihadist activity online. The group noticed the app had been published on April 1st, explaining that it provided access to the Taliban’s website and content in an app format. According to a Taliban spokesperson speaking with Bloomberg, the app was “part of our advanced technological efforts to make more global audience.” Its creation, the report also noted, signaled how the militant group was expanding its use of technology to reach a wider audience. 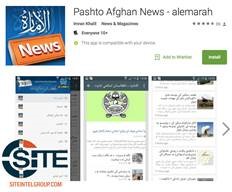 When the app was initially pulled down roughly two days after it went live, the Taliban spokesperson claimed it was because “technical issues” needed to be fixed. In actuality, Google pulled the app itself, the BBC later reported (and we’ve also confirmed), as it was in violation of Google’s terms.

Specifically, Google pulled the app because it was in violation of its policy that bans apps promoting hate speech, violence and illegal activities. In addition, Google suspended the developer account associated with the app as part of the ban.

However, the app’s publication is a high-profile example of a failure in Google’s app review process, and one that raises questions about how thorough its human reviewers are with the apps they test.

For years, Google took a more lightweight approach to app reviews – allowing the apps to go live almost immediately without any editorial oversight. But that has since changed. The company announced last March that it had actually begun using algorithms along with an internal team of reviewers to analyze apps for policy violations prior to publishing. It said that apps would be reviewed by this team, hands-on, before the apps go live on Google Play.

Clearly, the system still needs some tweaking. Though now a year old, Google is still relatively new to the app review process, in comparison with rival Apple. And it still relies heavily on its wider community of users and developers to flag apps for additional review. That means apps like this one are able to fall through the cracks, leaving Google to reactively ban them instead of prohibit their publication in the first place.

Google declined to comment publicly on the app’s removal.