Lugg, the startup that helps people with small moves, requested via an Uber-like mobile app, is this week expanding its reach into additional markets. While originally available in the San Francisco Bay Area, the company says it will now be available in Silicon Valley, from Palo Alto to Mountain View and down to San Jose. In addition, Lugg notes that all of the Costcos and Crate & Barrels in the Bay Area are pushing customers to Lugg as a means of helping them get their larger purchases home more quickly.

Launched last year, Lugg addresses a common pain point for city dwellers and others who don’t have large enough vehicles to transport big items, like new furniture they’re buying from a store or garage sale finds. Through its mobile application, users can snap a photo of the item they want moved, and the app will then connect you with a local mover immediately. All of the payment, including the tip, is handled within Lugg’s app – similar to other on-demand car services, like Lyft or Uber, for example. 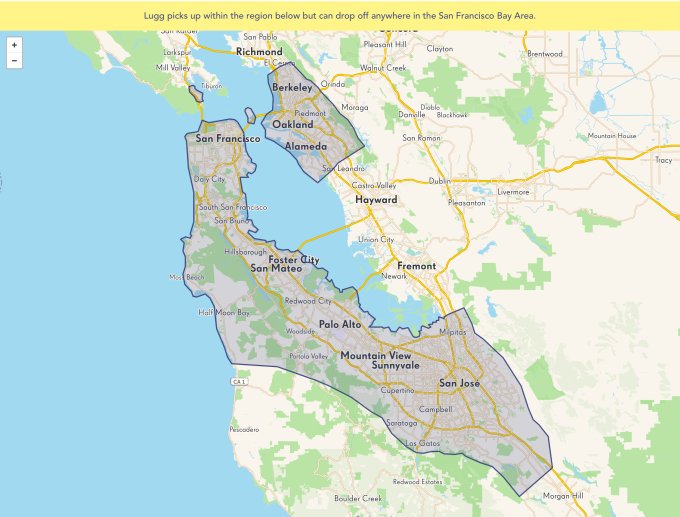 Though you could choose to use Lugg repeatedly to move the contents of an apartment across town (and some have), Lugg’s goal is not to compete with local movers or truck rental operations like U-Haul.

That is, Lugg is not just a modern front-end to a traditional moving company. Instead, anyone can sign up to drive and move items, provided they’re able to physically do the work. Lugg’s focus, meanwhile, is to help customers to with smaller moves – a big item or two – that needs to get across town.

Lugg is now in Costco!

Get your furniture, TV’s, and large items home in under an hour! 🚚💨 pic.twitter.com/MjjlRXABTj

Two movers are assigned to each truck, and they can toggle on and off their availability, also as with other on-demand businesses. (Drivers are vetted first to make sure they can handle the work, and Lugg has cargo insurance for when things go wrong.)

Customers pay for Lugg at a base price of $35, plus $2 per mile and $1 per minute of loading and unloading.

According to company co-founder and CEO Jordan Brown, Lugg has been growing 30 percent month-over-month since its launch, and now has 250 trucks (Luggers) on the platform making money. To date, the company has raised $5 million from A-Capital, Sequoia, SV Angel, Y Combinator, and others.

It’s hard to tell how well Lugg is performing by analyzing its App Store metrics, given its limited service area. It’s simply not an app that everyone can today use. However, it has climbed up from the 900’s in the Travel category around the holidays to the high 300’s this past month, which is promising.

To kick off its Silicon Valley expansion, Lugg is offering customers $10 off their first move with the promo code “SILICONVALLEY.”

Lugg is available as both an iOS and Android application.