Following yesterday’s news of Square’s entry into the online checkout space, the PayPal-owned payments platform Braintree today announced the launch of Braintree Auth. The system lets e-commerce platforms give their merchants easier ways to enable payments on their online storefronts. It also lets service providers access customer and transaction data on merchants’ behalf. The move signals Braintree’s attempt to expand its reach into the SMB market, as competition with startups like Stripe heats up.

Braintree says that it has already partnered with several large e-commerce platforms, including Bigcommerce, WooCommerce, and 3DCart, as its new service launches into private beta here in the U.S.

With Braintree Auth, e-commerce platform owners, as well as shopping cart providers and recurring billing services, can now make it easier for their merchant customers to accept credit cards, debit cards, and PayPal payments on their own storefronts through a single interface for shoppers.

The system also introduces a secure way for shoppers to store their cards with a website, then have those cards shared with other connected merchants also using Braintree to power their payments.

To get started with Braintree Auth, these platforms’ users (merchants, that is) either create a new Braintree merchant account or sign in to their existing account, using Braintree’s mobile-optimized form provided via a “Connect with Braintree” button.

When setup is complete and they’ve enabled credit, debit and PayPal payments, they’re then directed back to the partner’s website. 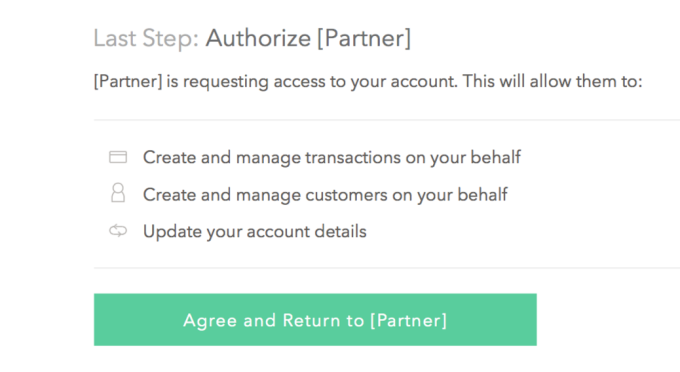 In addition to the above market of e-commerce platforms and service providers, Braintree Auth also has advantages for those businesses that provide invoicing, accounting and analytics services to merchants, Braintree notes. Through the new platform, customers of those types of businesses can connect to their Braintree and PayPal merchant accounts, then grant those businesses the ability to access the customer and transaction data they’ve collected.

During Braintree Auth’s setup, credit cards, debit card payments, and PayPal payments (including support for Express Checkout with PayPal One Touch) are enabled by default. However, once connected, partners can take advantage of the Braintree SDK integration to expand the types of payments their merchants can accept. That means merchants could choose to offer Venmo, Apple Pay, Android Pay, Coinbase and other, more innovative checkout options to customers that arrive in the future if they choose.

Of course, Braintree already has experience enabling payment systems like these for other platforms. For instance, it powers Facebook Messenger’s transportation platform, which allows Messenger users to order an Uber from within Facebook’s Messenger app. Braintree (along with Stripe) also powers Pinterest’s Buy Buttons, launched last year.

Braintree says that the new Braintree Auth platform is available today but only as an invite-only beta in the U.S. for the time being.