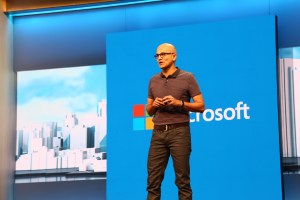 Satya spoke about new platforms and uses for Windows 10

Another new number Microsoft today shared is the total number of visits to the Windows Store — the company’s equivalent to Apple’s App Store. In total, the store has now seen more than 5 billion visits, up from 3 billion in January. All of those apps and devices add up – windows users have spent more than 75 billion hours using the Windows 10 platform.

Microsoft says Windows 10 continues to outpace all of Microsoft’s previous Windows launches. It is currently seeing four times the growth rate of Windows 8 (although, to be fair, that release was met with a big fat ‘meh’ from reviewers, so most businesses never updated to it), and compared to Windows 7, the growth rate is up 145 percent.

As Microsoft also noted today, this update isn’t just coming from home users and small businesses – enterprises are also adopting Windows 10 faster than they did any other recent Windows update. In addition, the growth stems from a new generation of Windows devices, including Hololens and the Internet of Things.

Finally, Microsoft talked in detail about how it wants Windows to be the platform of choice for all developers, perhaps hinting at future announcements later in the Build conference? Watch this space…