On its next trip to the International Space Station (ISS), SpaceX will be carrying an inflatable space habitat built by Bigelow Aerospace. The Bigelow Expandable Activity Module (BEAM) will be folded up for its April 8th launch, and then fully inflated once it’s properly connected to one of the station’s nodes, essentially creating a new room on the ISS.

SpaceX’s Dragon capsule will dock with the ISS a couple days after launch. In mid-April, the station’s robotic arm will grab BEAM from the trunk of Dragon and the inflatable module will be moved to Node 3 on the ISS. Inflation of BEAM will occur at the end of May or beginning of June, depending on when the crew can fit it into their schedule. At full inflation, BEAM’s internal volume will increase to ten times its launch volume. 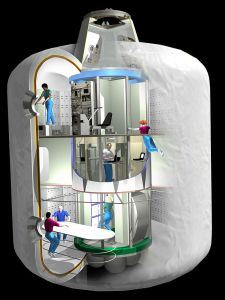 Inflatable modules are an attractive option for space habitats from a mass and volume perspective. In their deflated configuration, they are more compact and potentially much lighter than other alternatives. For these reasons, they could be easier to fit into a launch vehicle and even cheaper to launch.

Bigelow Aerospace was founded over 15 years ago by Robert Bigelow who made his fortune from his ownership of the Budget Suites of America. Bigelow originally licensed inflatable habitat technology from NASA after Congress cancelled their expandable habitat project known as TransHab in 2000.

However, the concept of space-based inflatables dates back to the early 60’s. In fact, NASA’s first communications satellite, Echo 1, was a spacecraft based on a balloon design. While the inflatable technology at the time worked sufficiently for satellites, available materials, like rubber, simply wouldn’t cut it for crewed missions. 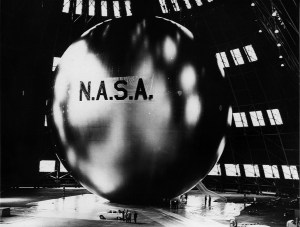 In recent years, advanced materials have made human-rated inflatable habitats possible. Bigelow Aerospace was founded on the premise that space tourists would be interested in staying in space hotels orbiting the Earth. The company successfully launched its first (uncrewed) modules, Genesis 1 and Genesis 2, in 2006 and 2007, and they’re both still in orbit today.

Unfortunately, Bigelow Aerospace was a bit ahead of their time. The company was working to perfect space hotels before private launch vehicles were ready to launch people (paying space hotel customers) into orbit. These factors contributed to a mass-layoff of 30-50 employees from their 150-person workforce earlier this year. Even now, human-rated vehicles won’t be ready until 2017 or 2018.

During a press call on Monday, Lisa Kauke, BEAM deputy program manager at Bigelow Aerospace, said that one of the big differences between BEAM and the previous Genesis structures is that BEAM will expand axially while the Genesis modules expanded radially.

BEAM inflation on the ISS / Image courtesy of NASA

At first glance, it may seem easier for an inflatable module to “pop” from impacts by micro-meteoroids or other debris. But with multiple layers of soft goods including a bladder and micro-meteoroid and orbital debris (MMOD) shield, Bigelow Aerospace has said that BEAM can resist small high velocity impacts as well as any rigid module on station.

The NASA representative on the BEAM project, Rajib Dasgupta, noted that testing BEAM on the ISS was a crucial step toward furthering the test readiness level and flight certifying the technology for human-rated missions. Betting an astronaut’s life on an entirely new habitat design will require many more in-flight tests to verify that it can meet the necessary specifications and NASA’s safety standards.

BEAM is equipped with sensors inside the module that will be used to track thermal, environmental, and radiation protection properties throughout its two-year stay on the ISS. During that time, astronauts on board will go into the module two to three times every six months for a few hours at a time.

Beyond the BEAM test on the ISS, NASA has issued a separate contract with Bigelow Aerospace for the company to demonstrate how their B330 inflatable module could be used to support missions to the moon and Mars.

Inflatable habitats bring a lot of promise to the future of space exploration, especially for longer, deep space missions where crew will require more room for supplies and more room to work. Over the next two years, the BEAM experiment will lay the groundwork necessary for NASA to consider implementing inflatable designs on future missions along their Journey to Mars.