We hear a lot about the Internet of Things on the consumer side. The oft trotted out example of the ‘smart’ refrigerator that tells consumers when they’ve run out of the milk, and so on. But more serious potential for IoT — and potentially seriously big wins — are likely to be on the enterprise side where connected sensors can be deployed to automate at scale.

By, for example pulling energy consumption data on large facilities and driving smarter and more responsive building operation — with the prize being major cost and resource savings.

b2b IoT startup Verdigris is playing in just such a space. The company took in a $6 million Series A round in December, which it’s just announcing now — and which includes, on top of that, a $3 million convertible seed, bringing its total raised to date to $9 million. Investors in the business include Jabil Circuit, Stanford StartX Fund, Founder.org Capital, DCVC, and a collection of private investors.

While, in classic startup style, Verdigris kicked off activities in a Sunnyvale, CA garage, back in 2010, it’s now based at the NASA Ames Research Park in Moffett Field — and has 20 active customers at this point, according to co-founder Thomas Chung.

The founding team switched from tinkering in a garage to going full time on the business in 2012, launching their IoT-powered b2b SaaS energy consumption analytics service for large facilities two years ago, in March 2014.

“We focus on domestic U.S. companies in hospitality, manufacturing, and healthcare facilities. We have two installations overseas. One is in Cairo, Egypt, the other in Livingston, UK. Both sites are active and serving as international proof of concepts,” Chung tells TechCrunch.

The idea for Verdigris came after the other two co-founders, Mark Chung and Jonathan Chu, had been working on advanced algorithmic acceleration for deep packet inspection at their prior company, Netlogic. “One month in December of 2009 Mark had an excessive electricity bill. We had an idea to apply a deep packet algorithm to figuring out where it was coming from,” says Chung. 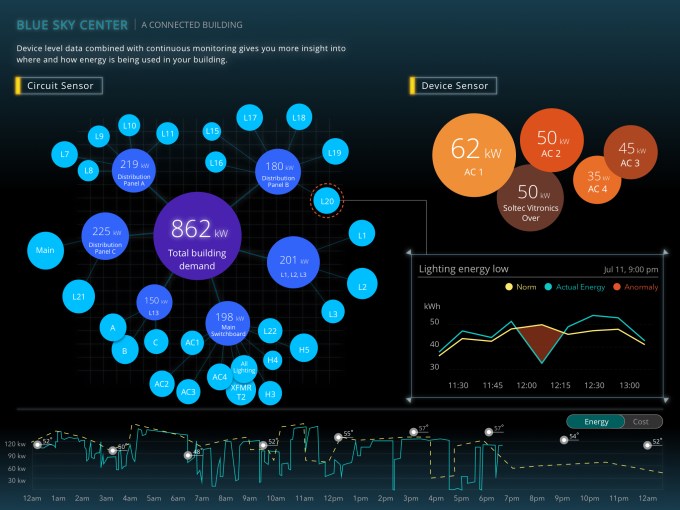 “We provide analytics and workflow automation to 24/7 facilities teams to improve operational efficiency, reduce equipment downtimes, and save on energy, delivered as a SaaS,” is how Chung sums it up.

“Our technology is an artificially intelligent energy sensor for facilities,” he says, going into more detail. “It automatically detects building equipment — everything from HVAC cooling towers and Electric Vehicle stations to iPhone chargers and laptops. This allows us to make actionable recommendations for facilities to improve how they condition their building, and manage their equipment and energy load.”

The system is comprised of proprietary sensor hardware (pictured below) — aka “a custom built magnetic digital sensor that uses the Hall effect to capture electricity ‘finger-prints'” — coupled with machine learning algorithms that can detect and track how energy is being consumed on the building’s energy network. 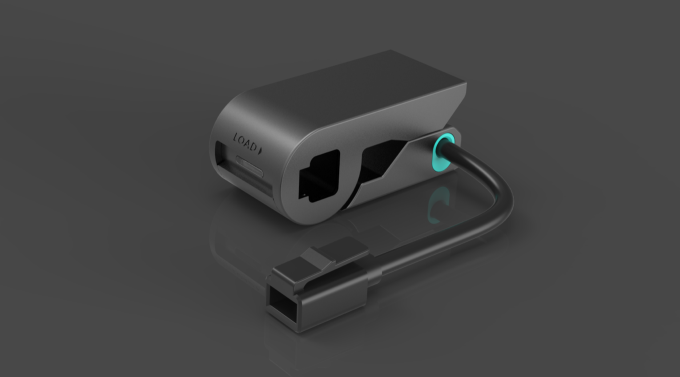 The hardware sensors are designed to be attached to individual circuits in a building without the need for rewiring. The sensors are daisy chained together and attached to a 4G/LTE enabled data transmission device fixed to each electricity panel in a building — enabling the data to be offloaded to Verdigris’ cloud platform for analysis.

“The energy data is packaged securitized and sent in real-time to an enterprise grade server in the cloud powering our algorithms,” explains Chung. “Features of the data are clustered through unsupervised Machine Learning into sets that reflect individual devices and device states.

“Once the clusters are learned, their representation is recorded in a library of devices. Convex optimization techniques can then map the device representations to the incoming stream of data. If we don’t know what kind of equipment it is or it hasn’t been seen before, the AI will prompt the user or our professional services team for labeling information.”

Verdigris delivers all this energy consumption intel to its customers as an enterprise SaaS, with a monthly fee for usage. It has built four products for facilities teams at this point: a mobile web app that offers real-time event tracking and notification; a fully featured web dashboard that lets users configure systems, label detected equipment, and trend and analyze the data; an interactive data visualization interface designed to engage building occupants and provide insights into personalized data; and curated monthly operations and energy reports for Chief Engineers, Finance and Ops Managers to gain visibility into asset performance and uptime and offer recommendations for adjustments to improve operational and energy performance.

While it’s started with energy consumption analytics at this stage, using its IoT hardware and AI software to improve in-building intelligence for facilities managers, the ultimate aim is to offer even more algorithmic automation down the line, by adding and automating controls.

Chung says Verdigris sees its biggest growth potential in: “Developing control features or integrating them through partnerships”. “We feel like our greatest value add will be when we can do the heavy lifting for our customers and increase the actionability of the insights we deliver,” he notes.

“It’s fair to say that we’re in the early stages of a market transformation that will create new value in business and energy management,” he adds.

While Chung notes there are “steadily growing” numbers of connected devices in the buildings environment, he says most are either closed looped systems or devices with “singular purposes with very little incentive to cross communicate” — arguing that the really big wins from IoT will come from building out networked infrastructure, rather than a conglomerate of individual smart sensors.

“The current market is still fragmented, wide open and the opportunity is huge,” he adds. “The number of connected devices in the building environment has been steadily growing, yet we don’t see a plausible leader in the space. The large incumbents are still in closed looped, isolated BMS systems. Newer devices are coming online with wi-fi, zigbee, or LTE. These devices all have singular purposes with very little incentive to cross communicate. Regardless the value of their stand alone function, as a networked infrastructure they are far more valuable than the sum their independent features.”

“Verdigris has been building an artificial intelligence truly capable of understanding device-level electricity consumption and usage in buildings for the first time. We see this as a critical step toward creating ambient intelligence — the idea in the not-so-distant future, buildings will be autonomous, efficient and sustainable environments responsive to their inhabitants,” he adds.