NASA has released close-up images of the dwarf planet Ceres, the biggest object in the asteroid belt, revealing new details about its mysterious bright spots. These images were taken by the Dawn spacecraft, which left Earth nearly a decade ago.

Of particular interest are the high-resolution images of the Occator Crater, which contains the mysterious bright spots that have perplexed scientists for years.

Ceres’ bright spots were initially identified in grainy photos taken from the Hubble Space Telescope in 2003. Because of the resolution, the bright spots appeared to be clumped together as one. According to NASA at the time, “the bright spot that appears in each image is a mystery.” 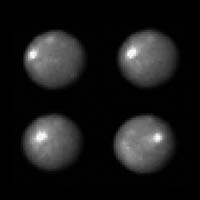 Better images were obtained when the Dawn mission approached Ceres in 2015 and revealed that the bright spot was actually a cluster of bright areas inside of a crater, now called Occator Crater.

Taken from an altitude of 240 miles above the surface, the most recent images provided sharper detail of Ceres’ surface than anyone had ever seen. 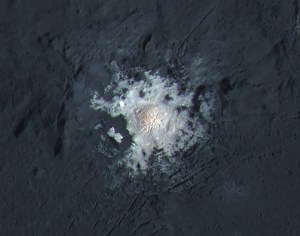 With the new data, scientists were able to see that the material reflecting the light is on top of a dome in a crater about 2.5 miles deep. There are also fractures that surround the dome and run through smaller bright regions within the crater. 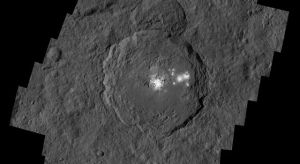 These details don’t solve the bright spot mystery – in fact they provide more questions than answers – but they’re finally giving scientists something to work with.

“The bright spots in this configuration make Ceres unique from anything we’ve seen before in the solar system. The science team is working to understand their source.” – Chris Russell, principal investigator for the Dawn mission

Initially, scientists had a few hypothesis to explain the sources of Ceres’ bright spots. Ice, volcanoes erupting ice, or salt deposits were all explanations for the material that was reflecting sunlight. 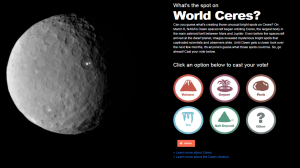 Upon further analysis, experts concluded that the shiny spots were probably due to light reflected by salt deposits. The prevailing theory is that there is a subsurface layer of briny water ice. When asteroids have hit Ceres in the past, some of that briny water ice was released onto the surface. Eventually, the water ice evaporated and left behind salty deposits.

Because they’re lighter than their rocky surroundings, the salt deposits would reflect a relatively high amount of sunlight. 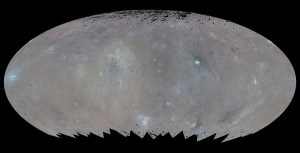 Using different instruments on board, NASA has started to investigate the possibility of subsurface water ice.

Dawn’s Gamma Ray and Neutron Detector is used to determine the chemical makeup of Ceres. Gamma rays and neutrons measured from Ceres, which are sensitive to the elemental composition on the surface, can provide scientists with a fingerprint of Ceres’ chemical composition.

So far, the Gamma Ray and Neutron Detector has found indications of increased hydrogen concentrations at high latitudes. Because hydrogen is a principal component of water, it’s possible that water ice is close to the surface at these locations.

Ultimately, there’s more work to be done to understand the complex processes shaping Ceres, but thanks to the Dawn mission, scientists are much closer to solving these mysteries.