Apple’s newest addition to the iPhone family may be its cheapest phone yet at $399, but the four-inch iPhone SE isn’t likely to move the needle in emerging markets, where the lion’s share of growth in the handset industry lies.

A report from Gartner found that global smartphone sales have reached their slowest growth rate since 2008 as smartphone saturation sets in, particularly in Western markets. That general slowdown, which has been impacted by China, has sent many phone companies in search of growth potential in nascent markets like India, Southeast Asia and Latin America — regions were consumers are particularly price sensitive but smartphone volumes are rising.

Apple has faced many calls from investors and industry watchers to release a more wallet-friendly device to capture new users in such growth markets, but the iPhone SE is not that phone. Apple is never likely to move into the mass market bracket of places like India, where the majority of handset volume is sub-$100, but the new release does offer something new.

The iPhone SE marries the innards of Apple’s top-of-the-range iPhone 6S, including the same 12-megapixel camera and 4K video capture, with a four-inch form factor at snip of the $549 starting price of the 6S.

That’s unlikely to make a dent in China, where the market has long moved to larger, “phablet”-sized devices which are preferred for video, entertainment and other such activities. Apple’s previous stab at a mid-range phone — the ill-fated iPhone 5c — didn’t go down well in China where it was perceived as cheap. The iPhone SE has evoked a similar reaction in China, where users of microblogging site Weibo have christened it ‘The Red iPhone,’ in homage to Xiaomi’s Redmi sub-$100 affordable range, the Wall Street Journal reported.

An iPhone For India?

The iPhone SE may not satisfy mainstream tastes in China, but it may have more luck in India.

At the iPhone SE launch event yesterday Apple revealed that it sold 30 million iPhone 5s units last year alone, and the device — first launched in 2013 and clearly the model for the iPhone SE — performed particular well in India.

“When Apple lowered the iPhone 5s price in Q4 2014 to nearly $300 [from an initial $500], [its] contribution [to the total number of iPhone sales in India] went up from single digits to nearly 43 percent,” Tarun Pathak, an analyst at Counterpoint Research, told TechCrunch in an interview.

That rise in demand showed that Indian consumers are willing “to lock themselves into the Apple ecosystem” even if it involved buying a two-year-old phone, Pathak added.

Putting more advanced technology into that same form factor at a similarly low price could offer the best of all worlds, but Pathak isn’t quite so bullish on the iPhone SE. That’s because the big problem for Apple is price. The iPhone SE that is billed as starting at $399 will sell from around $599 in India.

Higher pricing for Apple products isn’t new in India. Thanks to taxes and other fees, India was the most expensive country to buy an iPhone 6S and iPhone 6S plus last year. Apple, which sells in India via channel partners since it isn’t permitted to run its own retail business in the country, subsequently cut costs, but, in a price sensitive market with much competition, the markup may cut into the phone’s potential.

A highly specced iPhone at $300 may be a snip, but once a device is priced around $500 it requires a buyer with a certain level of spending power. Inevitably, at $500, that person has the capacity to spend a little more and, since many in Asia are moving towards larger devices, that means less of a need to compromise screen size for price.

Indeed, Apple’s own portfolio could provide competition to its new phone.

“Because the price of the iPhone 6 [and iPhone 6 plus] already dropped in India, Apple is directly competing with its own phone which might be more appealing to consumers,” IDC analyst Kiranjeet Kaur told TechCrunch, referencing the fact that, like China, Indian consumers are increasingly interested in larger screen iPhones. 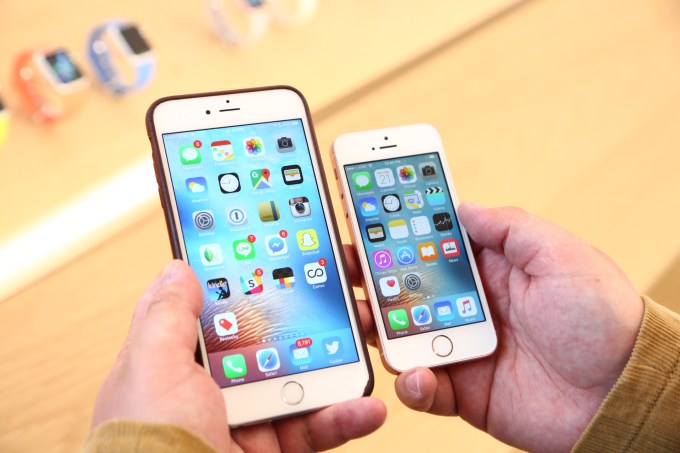 The iPhone SE compared to the iPhone 6S plus

The iPhone 6 retails at upwards of $649 brand new in India, that’s not a lot more, while a pre-used model could cost hundreds of dollars less. Counterpoint’s Pathak said Apple is applying for a license to sell the iPhone 6 and iPhone 6 plus refurbished in India, an eventuality that could see the devices retail from stores for around the same price that the iPhone SE currently occupies in India. (Apple has also applied for its own retail stores in India, which would give it greater price control.)

When faced with the choice of a larger phone for the same price as the iPhone SE, analysts believe aspirational consumers may choose the latter. Or, at least, that there is a decision will impact Apple’s new phone.

“In emerging countries, we are not very convinced that [the iPhone SE] will generate volume,” Pathak said. His firm, Counterpoint Research, estimates that Apple has around 4.5 million active iPhones in India, just a fraction of India’s billion-plus population, while its sales are nearly 15 times lower than China.

“It may be a short growth spurt not a long-term one,” IDC’s Kaur said, slightly more optimistically of the new iPhone. “But I don’t believe it will create a new segment for Apple” in emerging markets.

There is some cause for optimism though, as part of Apple’s wider efforts.

Counterpoint’s Pathak is of the belief that the new device, while unlikely to be universally appealing, may entice some new price-conscious users to Apple.

“People in India are aspirational. Those locked into the ecosystem via a low price device may upgrade later. That’s an important market for Apple. In two, three or four years, the same young population will have increased affordability,” he said.

The device is likely to perform better in Western countries, where fewer consumers desire large screened phones and many have held on to the iPhone 5s in the face of newer product releases from Apple. The iPhone SE would give them a taste of Apple’s newest technology — such as Touch ID — without forcing them to adopt a new form factor.

But price is unlikely to be a key motivator in markets like the U.S., where consumers typically choose either high-end premium devices or budget phones. The move away from fully subsidized devices could play in the iPhone SE’s favor but, then again, U.S. consumers are adopting monthly payment plans for their phones which enables them to buy more expensive flagship devices as they do with contract deals.

Just banking primarily on small phone lovers in the West might not equate to volume either. Consumer Intelligence Research told Recode that it expects Apple to sell fewer than six million iPhone SE units in its first year, with the company’s high-end offerings likely to be more appealing to consumers.

Article updated to correct that Apple’s sales in India are nearly 15x lower than in China.