You don’t have to be a circus freak contortionist to sleep on a plane thanks to Woollip. Now you can dive face-first into an inflatable travel pillow that’s made to sit atop your tray table. Woollip just hit Kickstarter for $30 and plans to ship in July. 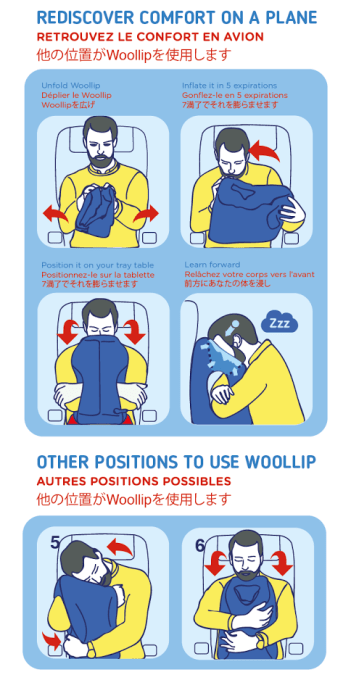 Most travel pillows sit behind your head or around your neck. But when you’re sitting upright, that makes you more likely to topple forward. Woollip takes advantage of the only extra space you’re given on a plane or bus — right in front of you. The design was inspired by the face support from professional massage chairs.

With holes to stuff your arms in, Woollip can also be turned on its side to fill the crevice of a window seat. Plus, you can tuck your phone inside so you can read or watch a movie as you prepare to sleep. Both of these features make it more practical than the giant block-like Skyrest.

Woollip supposedly takes only 5 breaths and about 15 seconds to inflate, and just 2 seconds to deflate. It folds up to the size of a brick and is said to weigh about as much as a smartphone.

As long as Woollip can hold its air so it doesn’t sag while you slumber, it could save travelers from sleepless nights and neck pain. Flying coach just got comfier.