Mondo, the yet-to-launch U.K. banking startup that is creating quite a lot of buzz amongst the London tech scene and beyond, is opening its Beta to the public today — albeit one limited in functionality while the company seeks a full banking license. 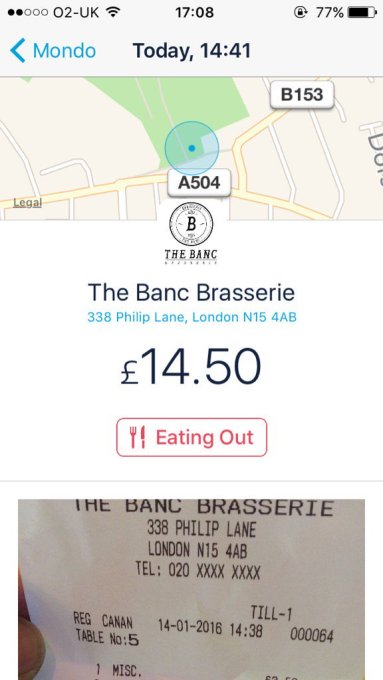 Paying for lunch at my local hangout, The Banc Brasserie in Tottenham.

As it stands, Mondo offers a pre-paid MasterCard and a rather nifty iPhone app that features the ability to track your spending in realtime, view geolocation-marked transactions on a map, view spending by category, and get a graphical timeline of your overall expenditure. There’s also the option to send other Mondo members money (ie peer-to-peer payments).

From today, anyone who downloads the Mondo iPhone app from the App Store can sign up and see their place in the queue, while I’m told that the startup will begin sending out 1,000 cards to people at the front of its 52,000-strong waiting list by the end of this week, with many thousands more being issued over the next few weeks.

“I feel like we’ve delivered about 20% of the functionality we’ll offer when we’re a full bank,” Mondo co-founder Tom Blomfield tells me. “We’re targeting people who want to get involved early to help build the kind of bank that they’d be proud to call their own. At this stage, you’re joining a mission to improve the state of banking”.

Mondo also recently bolstered its funding in anticipation of attaining regulatory approval as a fully fledged bank, which I gather is hopefully on track for later this Summer. Passion Capital followed on with a further £5 million last month, adding to the £2 million already invested by the London VC, and an additional £1 million was recently raised via equity crowdfunding.

Part of the reason why Mondo is garnering so much buzz — aside from noisy tweeting from investor Eileen Burbidge and other users, like myself, who got into the Beta early — is that the startup has already held several well-attended hackathons. That’s because Mondo has an open API from the get-go, part of a wider differentiator that’s seeing it build a “full-stack” bank with its own in-house banking tech in order to offer features that legacy banks struggle with as they are reliant on outdated software and infrastructure. 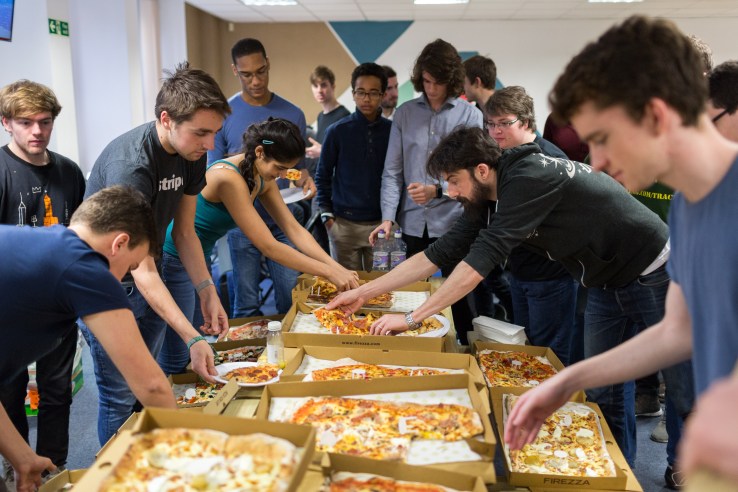 “We’ve had hundreds of people attend our hackathons and they’re now some of our biggest supporters. It’s also great for recruitment!” Blomfield says. “Some of the most interesting ideas people have been working on are around retailer loyalty. My coffee shop still uses a little piece of card to collect 10 stamps for a free drink. That doesn’t feel like a 21st-century solution to customer loyalty”.

Meanwhile, we count four so-called ‘challenger’ and digital-first banks set to launch in the U.K. this year. In addition to Mondo, there’s Starling (for which Blomfield and co. have history), Atom Bank, and Tandem. The latter two look further ahead, having both already gained the much-coveted banking license.

To that end, when I ask Blomfield how Mondo plans to compete with other banking upstarts, he doesn’t hold any punches. “I think some of the other challengers are using ‘mobile’ as a ‘low-cost channel’ to acquire customers and sell them a pretty traditional range of banking products. It’s First Direct for the iPhone,” he says.

“Mondo is trying to build a ‘home screen app’ that helps you live your life. We do that by providing a current account, debit card and overdraft. We then link into all of the other parts of life that impact your finances. If you forget to tap-out on the tube, we can automatically go and get you a refund. If you shop in Sainsburys or Tesco, we can automatically accumulate and redeem Nectar or Clubcard points. If you bought dinner for friends last night, we can automatically help you split the bill and remind people to pay you. If you’re saving for a holiday or wedding, we can send you little “nudges” to make it effortless.”