Rumors are flying today that Apple is moving part of its cloud business from AWS to Google’s Cloud Platform. We did some asking around and yes, it does appear that Apple has made some moves to diversify its iCloud storage, tapping Google for some of that business.

This is another huge win for Google and a — at the very least perceived — loss of ground for AWS, which has watched as Dropbox moved large parts of its US storage business in-house and Spotify moved at least part of its business to Google, too.

If you’re keeping score, it’s been a good month for Google and especially the new head of its cloud business Diane Greene. High profile clients like Spotify and Apple would certainly make it more attractive to other enterprise customers. Google’s Cloud Platform may have the power of Google’s data center technology behind it, but that hasn’t yet helped the company in competing against AWS and Microsoft’s Azure platform. AWS has the advantage of an early start and Azure profits from Microsoft’s existing sales channels and it’s focus on hybrid cloud technologies. And even with the power of Microsoft behind it, though, Azure remains a distant second in the cloud business.

What’s not clear is if Apple has decided definitively to move platforms. . 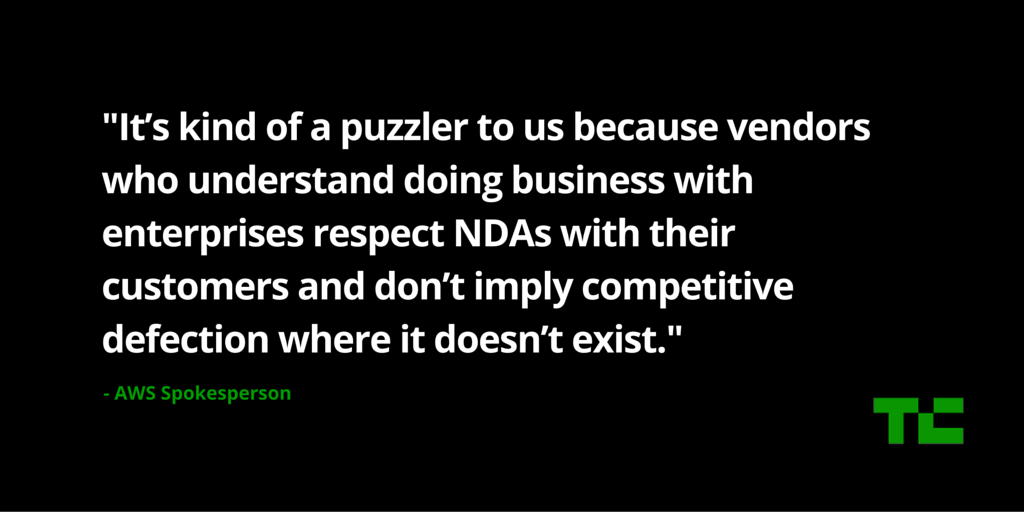 Update: Amazon has now provided us with the following statement, which seems to imply that the company believes Google leaked the information and that Apple is still an AWS customer: “It’s kind of a puzzler to us because vendors who understand doing business with enterprises respect NDAs with their customers and don’t imply competitive defection where it doesn’t exist.”

One industry insider who chose not to be identified, however, told TechCrunch that Apple was definitely exploring its options around public cloud vendors, looking at Microsoft Azure and Google, but it had not made any firm decisions yet. It’s worth noting that Apple already uses  Azure (and AWS) for iCloud services and media serving.

Whether Apple will continue moving off of AWS and onto other platforms is anyone’s guess. But at the moment it appears that this is a matter of diversifying its portfolio of cloud suppliers.

Another wrinkle here is that Apple is currently expanding its data center in Prineville, Oregon, and is also expected to invest heavily in new data centers in both the U.S. and Europe. If that’s the case, moving from AWS to Google, then Google to Prineville wouldn’t seem to make sense. Why not just wait until the data center construction is complete?

If Apple is indeed simply looking to diversify its infrastructure, though, then adding Google (on top of Azure, AWS and its own data centers) would be a fairly logical move. It’s also possible that Apple is only looking at some very specific services on the Google cloud, with the BigQuery data analytics platform being the prime suspect here.

One thing we do know is that in its most recent earnings call, Akamai mentioned that two of its biggest clients were diversifying. “Over the last few years, our largest two customers, in particular, have comprised about 13% of Akamai’s overall revenue,” Akamai CEO Tom Leighton said. “As we look ahead to 2016, we expect these two accounts to still be our largest media customers and that they will contribute about 6% of our overall revenue. This seven-point change in contribution results from their increased do it yourself or DIY efforts, and it is the main reason we anticipate a lower year-over-year revenue growth rate over the next couple of quarters.”

It’s widely known that Akamai’s biggest client is Apple, so that means it’s also planning on moving some of its Content Delivery Network business in-house sooner than later.

Google is hosting a major cloud event, Google Next, in San Francisco next week. If the company plans to publicly talk about its new customer (and that’s definitely a big ‘if’), then it’s likely it will do so then.