F.lux, the popular color-adjusting application for computers and mobile devices that reduces blue light emissions for better nighttime usage, has now arrived on Android. Unfortunately, the application (for now) requires users to have a rooted phone in order to take advantage of its functionality. The release is notable, however, as it comes at a time when the major platform makers are building in nighttime modes in their operating systems, including iOS 9.3’s “Night Shift,” Amazon Fire tablets’ “Blue Shade” and Android N‘s “Night Mode.”

That leaves some question about F.lux’s future in this increasingly mobile world.

The idea with these optional brightness and hue-adjusting features is to provide users with a way to use their devices at night without disrupting their sleep patterns. Numerous studies have shown that blue light keeps people’s pineal gland from releasing melatonin — the hormone that reduces alertness and signals to the body it’s time to sleep. By gazing into our phones and tablets after hours, we’re screwing around with those natural rhythms.

The makers of F.lux have been working on solving this problem for years, initially on computers. Its app, designed back in 2009, today works on Mac OS X, Windows, Linux and jailbroken iOS devices.

Unfortunately, F.lux has had a hard time making the mobile transition due to restrictions from the platform makers.

For example, last November it released an open-source version for iOS that could be side-loaded onto your device without jailbreaking, but it had to pull it down, as it violated Apple’s Developer agreement. With Apple’s debut of “Night Shift,” it has begged the company to reconsider letting it back into the App Store. 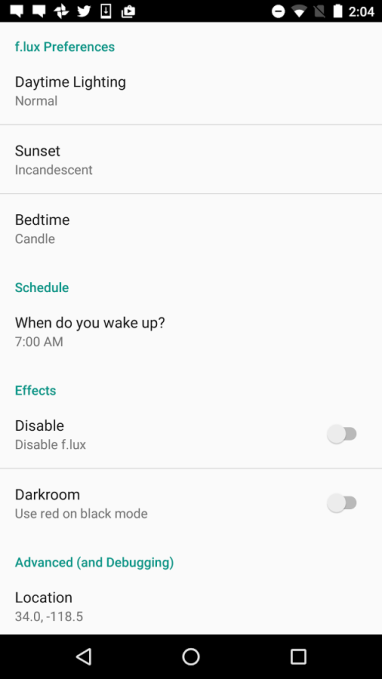 Similarly, the Google Play version of the app is not one that just anyone can install and run — you also would need to have administrative control over your device via rooting.

F.lux refers to this current release as a “preview” that’s still in “beta quality.”

In addition, the app won’t run on all phones — many Samsung Galaxy 5.x devices won’t work, for example. Instead, you’ll need a rooted Lollipop or Marshmallow (5.x or 6.x) device to have a good shot, though some rooted KitKat (4.x) devices may also work. The company is asking users to let them know in the comments in its forums about what works and what does not.

As with other versions of its application, F.lux will allow you to control the time of day you want to switch over to a different mode, and which color temperature scheme you want to use.

However, given its requirement for rooted devices, it may have a hard time finding a wide audience on Android, where there are already a number of third-party applications that claim to offer blue light reduction. While many of these make their changes by using color overlays, novice users may not know the difference. F.lux requires root because it makes changes to the color temperature at a system level, for increased accuracy.