The first phase of ExoMars, an uncrewed Mars mission from the European Space Agency (ESA), successfully launched today from Baikonur, Kazakhstan. Lifting off on a Russian Proton-M rocket, the Mars-bound spacecraft has begun its 7 month, 300 million mile long journey and is scheduled to arrive in October.

Signal from #ExoMars @ESA_TGO confirmed! We have a mission to #Mars! pic.twitter.com/iggpe2ZJf5

The objective of today’s mission is to search for evidence of life on Mars, active geological processes, and to test key technologies required for subsequent Mars missions.

ExoMars is made up of 2 phases. Today’s launch brought along 2 different modules that make up the first phase: the Trace Gas Orbiter and the Entry, Descent and Landing Demonstrator Module known as “Schiaparelli.” ExoMars Phase 2 will launch in 2018 and includes a rover designed to conduct exobiology and geochemistry research. 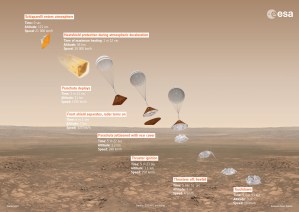 A successful landing would mark an important milestone for ESA. Their last attempt to place a lander on the Martian surface occurred in late 2003 with the Beagle 2 lander. Similar to ExoMars, the Beagle 2 traveled to Mars with an orbiter.

On December 19th 2003, Beagle 2 was successfully deployed from the Mars Express orbiter and was scheduled to land on December 25th. Unfortunately, ESA was unable to contact the lander after its expected touchdown. After multiple failed contact attempts, ESA declared the mission lost.

Over 12 years later, ESA intends to overcome that failure by successfully landing and communicating with Schiaparelli.

The instruments on board the orbiter will be used to detect and characterize trace gases in the Martian atmosphere with an improved accuracy of 3 orders of magnitude compared to previous measurements.

Scientists are particularly interested in characterizing the presence of small amounts of methane that have been detected in the Martian atmosphere. This piques researchers’ interests because living organisms produce large amounts of methane here on Earth. While there are also purely geological processes that produce the gas, it’s a good starting point for those searching for life on Mars.

To make matters more interesting, methane is short-lived on geological time scales. Its presence suggests that there’s an active source producing the gas on Mars today. Further research is required to determine where the methane is coming from.

The Trace Gas Orbiter will also be used to map hydrogen levels just beneath the Martian surface. Locations where hydrogen is found may indicate water-ice deposits, which could be useful for future crewed missions. Landing locations for crewed missions may be influenced by these findings since water-ice can be leveraged to generate potable water or rocket fuel.

Phase 2 of ExoMars will launch in May 2018, which is also when NASA’s next Martian lander is scheduled to embark on a trip to the red planet.