Mahindra, the India-based manufacturing giant, wants to offer more people the chance at a cleaner commute. The GenZe 2.0 electric scooter carries one person, a couple big bags of groceries, and a price tag of just $3,000. As a former scooter commuter myself (on a 50-cc gasoline-powered bike), I was eager to take the GenZe 2.0 on a weekend-long test drive.

Electric vehicles have a lot of appeal – they use no gasoline, they emit no greenhouse gasses, they’re quiet, and they recharge as easily as your phone. But they’re expensive. A Tesla Model S, without including tax credits or five years of fuel cost savings, starts at $75,000. A Nissan Leaf starts at $29,010. Even an electric motorcycle like the race-tested Victory Empulse TT is $20,000. There’s a certain income level required to get away from gasoline. That’s why the GenZe 2.0 is so special.

GenZe has a shop on a busy thoroughfare in Portland, Oregon, where I picked up my test scooter. I was shown how to unlock the scooter via password using the weatherproof touchscreen, and how to unlock the removable battery. Then I put the kickstand up and headed out onto the street.

Besides merely driving the scooter, there are several things to play with on the 7-inch screen, preferably in your driveway or at a stop light. There are three programmed driving modes: Safe, for newbies; Econo for maximizing battery power; and Sport for a little extra zip. Advanced users can set individual parameters, like the regenerative braking system, to their liking for more aggressive performance or better battery management.

The GenZe gets about 30 miles per charge, which I found to be true no matter how I drove it. That’s in part because not even the Sport mode overcomes the scooter’s 30 mph governor. It’s enough for getting around town, which is the point of this scooter, but it is frustrating to feel the motor spin up and then just kind of settle at 30 mph.

But 30 mph is good enough for most city streets, which is exactly the kind of driving the GenZe is designed to do. You could easily commute to work and home in an urban area at 30 mph or less, and probably using one 30-mile charge. But if you need more range or your parking space is nowhere near an outlet, that’s where the removable SmartPack battery comes in. Unlock it and slide it out. The battery is really heavy, but the handle is padded. It’s fine for a short carry to the nearest 110-volt outlet, and it fully recharges in about three and a half hours. 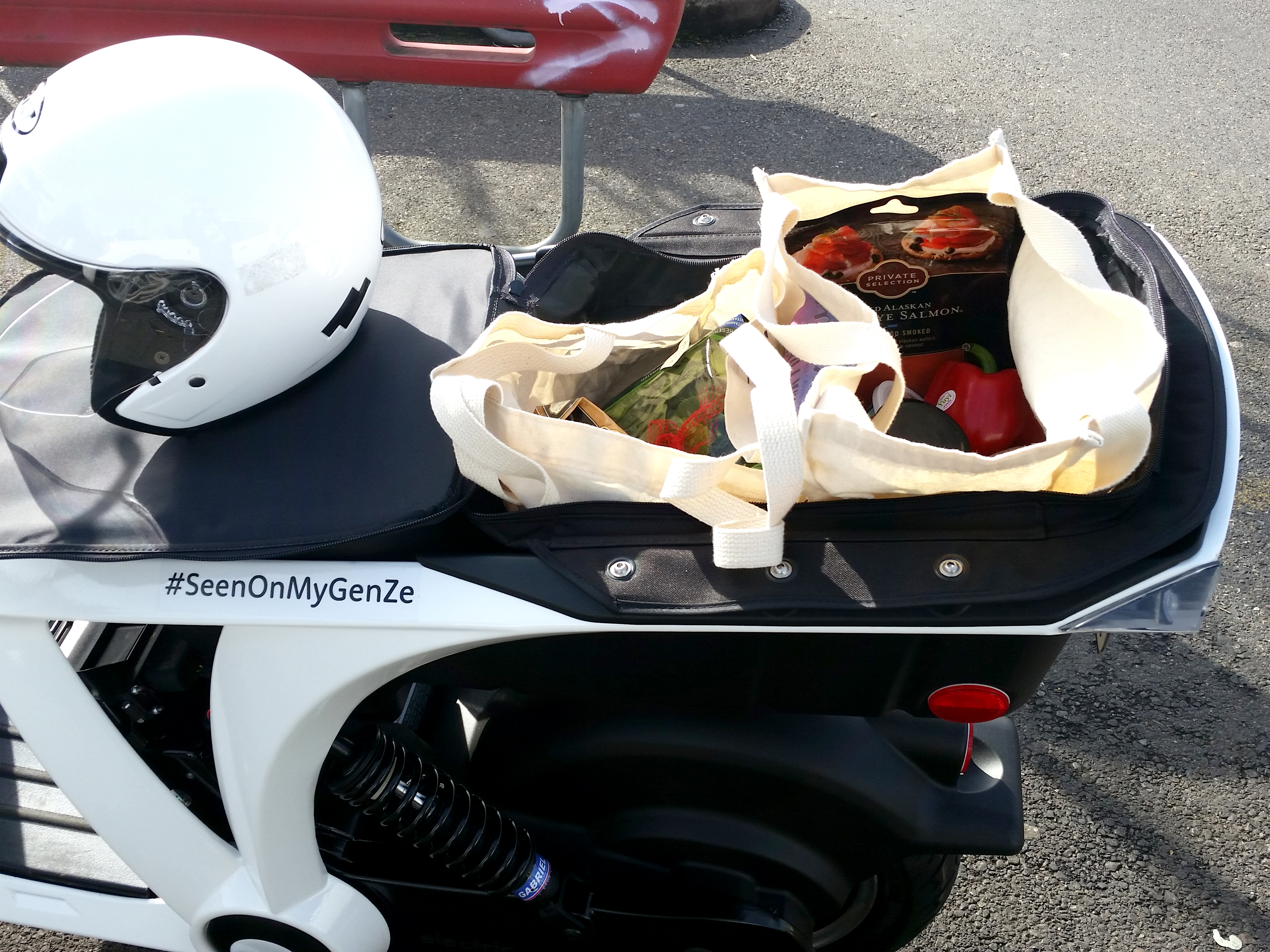 I took the GenZe grocery shopping to test the capacity of the zip-top Back Bay mounted behind the seat. It easily fit two large canvas shopping bags full of food—no squashed loaves of bread or crushed tortilla chips. There’s also a charger built into the cargo bin for cell phones and laptops. The seat is large and comfy, though as a short rider, I did have to move forward quite a bit when waiting at red lights to get my feet solidly in contact with the ground.

The GenZe has a solid feel, and like most electric vehicles, it is nearly silent. It’s not speedy, but it is fun and surprisingly versatile for city dwellers. And the $3,000 price tag reaches Mahindra’s goal of putting an electric vehicle within reach of more people globally.