After his nearly year-long mission on the International Space Station (ISS) and 20 years of service with NASA, Astronaut Scott Kelly will retire from the agency, effective April 1st.

“This year-in-space mission was a profound challenge for all involved, and it gave me a unique perspective and a lot of time to reflect on what my next step should be on our continued journey to help further our capabilities in space and on Earth,” – Astronaut Scott Kelly

In total, Kelly flew in space 4 different times, beginning with a trip to service the Hubble Space Telescope in 1999.

With his final flight, Kelly broke the record for the most cumulative time in space for an American with a total of 520 days. The world record for this feat is held by Russian cosmonaut Gennady Padalka for his whopping 879 days achieved over 5 spaceflights. 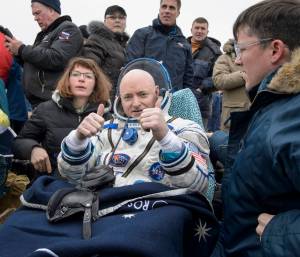 When Kelly returned from his mission on March 1st, he was immediately required to complete an hour-long physical test, much like an obstacle course, in order to analyze his general condition.

Health of astronauts once they’ve come back to Earth is a high priority because spending an extended period of time in a weightless environment is hard on the human body. Without the heavy downward force of gravity, astronauts can experience muscle atrophy and bone loss, among other problems.

Coming back inside after yesterday's excursion. Still trying to wrap my head around why we call it #spacewalk and not spacework. #YearInSpace #space #spacestation #iss #SpaceWork

Astronauts often experience back pain, for example, because their spines will elongate in weightless conditions. During Kelly’s time spent in orbit, he grew about 2 inches taller.

Growth spurts occur because the vertebrae in our backs act like a giant spring and are able to be stretched and compressed. Under the force of gravity, our vertebrae are coiled tightly. On the ISS, where the astronauts feel weightless, spines have the ability to elongate up to 3 percent of their total length.

While Kelly was about 2 inches taller during his time in orbit, he returned to his normal height within a few days of his return.

Now that Kelly is back on Earth, a new phase a research and analysis begins.

The purpose of the One-Year Mission was to study the medical, psychological and biomedical challenges a human would face during long-duration spaceflight. And although Kelly will be retired, he’ll continue to participate in a number of research studies in the months ahead.

On Instagram, Kelly revealed that the post-flight analysis has already begun.

#repost @amikokauderer The science continues. Now that @stationcdrkelly has returned to #Earth from a #YearInSpace, so has the science. And it's taking over my vanity at home. #science #biologicalmatter #space #issresearch #home

Part of the reason Kelly was selected for the One Year Study was because his identical twin brother, Mark Kelly, is also an astronaut. During Scott Kelly’s time in orbit, his brother Mark Kelly was down on Earth acting essentially as a control subject.

A trip to #Mars will challenge bones. Scans today to study my bone health after a #YearInSpace to help solve the problem. #space #spacestation #iss #issresearch #nasa #science #exploration #journeytoMars

The two twins have been participating in NASA’s Twin Study in which 10 different investigations are already underway. Using a combination of pre-flight, intra-flight, and post-flight data, these investigations are comparing the brothers on the molecular level in addition to their physiology, microbiology, behavioral health. 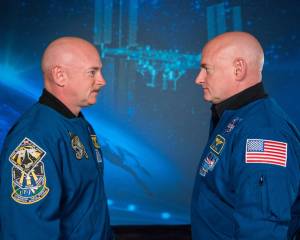 Results from these studies will help scientists understand how humans change when they spend an extended period of time in outer space. This knowledge will support the Journey to Mars initiative, through which NASA plans to send humans to the red planet in the 2030s.

The dangerous amount of time astronauts must spend in the harsh, radiation-filled environment of deep space coupled with the technology required to get there makes a potential human mission to Mars a difficult challenge. Traveling to Mars would take astronauts up to 9 months, and that doesn’t include time in orbit, on the Martian surface, or the equally long trip back to Earth.

“Our universe is a big place, and we have many millions of miles yet to explore. My departure from NASA is my next step on that journey.” – Astronaut Scott Kelly

With the One Year Study and the Twin Study, NASA hopes to move the needle and bring the scientific community closer to solving the human side of this long-duration spaceflight challenge.