Vimeo is furthering its investment in original programming, the company announced this morning with the unveiling of the video network’s second slate of programs and films. The new batch includes the company’s first-ever feature film as well as its first concert film, representing an expansion in terms of the type of content it aims to host on its service.

The announcement follows rival YouTube’s launch of its own originals last month, which included a new PewDiePie show, plus three exclusive movies. YouTube’s programs were made available via YouTube Red, the company’s newer, ad-free subscription service.

However, unlike YouTube, which aims to attract a younger fanbase who’s more familiar with YouTube stars than traditional Hollywood actors, Vimeo aims for a slightly older crowd, as is evidenced by its selection of original programming.

Also arriving is a comedy special called “Garfunkel and Oates: Trying to be Special,” featuring the comedy-folk duo Riki Lindhome and Kate Micucci, who have done a TV series for IFC, a web series, multiple albums, concert tours, and music videos. Again, this is for the grown-ups, given the comedians’ topics of choice in the past.

All four programs will premiere on Vimeo this year at staggered times, beginning in April, and will be available for rent or purchase.

The company also today announced the premiere date for season two of its original series “The Outs,” which features 20-something gay men struggling with life and finding love in the city. It will debut new episodes starting on March 30th. 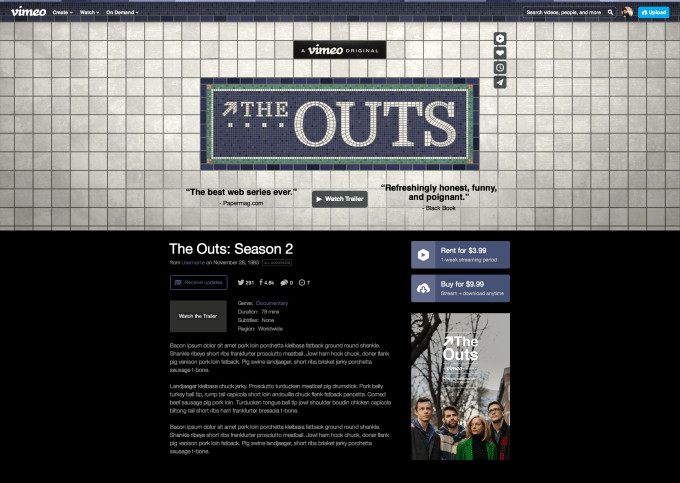 The unveiling of the new series and films comes shortly after Vimeo upgraded its mobile app for iOS with a focus on finding videos on its network, including its originals. The app’s revamped interface now organizes videos into categories, like Music, Documentary, Travel and others – choices that reflect Vimeo’s desire to distance itself from being a home to personal videos, and to better reflect its higher-quality content from indie creators, writers, directors, and more.

Previously, it was reported that Vimeo was planning to spend at least $10 million on content in 2016. Though the company didn’t talk numbers in today’s announcement, it did say that its new shows represent “a significant investment” in original programming.