Twitter Moments, the feature that’s meant to highlight the best of Twitter in a more magazine-like format, has so far failed to incite further user growth, as was initially hoped. But the company is continuing to develop and improve the experience, which offers collections of tweets and associated media content in a separate tab in Twitter’s application both on the web and mobile. Today, Twitter says it’s making it easier for users to explore the links in Moments when on iOS and Android, by rolling out support for AMP-powered web pages when available.

Following the update, Twitter users can now tap on a link to a news article, blog, recipe or other item from directly within the Moment itself, the company says. Then, when you’ve finished browsing, you can easily return to the Moment by clicking out.

When Moments first launched, its mini-stories would combine text tweets, photos, videos, and Vines, but they didn’t support full articles or live Periscope videos. In the weeks since, the company has been honing the product, including giving it a more prominent position on Twitter itself.

Today’s upgrade, however, is a notable change in terms of Twitter’s plan to work with publishers on its platform, akin to something like Facebook’s Instant Articles. But unlike Facebook’s effort, which focuses on making publisher content load faster and be more easily read by hosting it directly on Facebook, Twitter is actually directing traffic back to publishers’ sites.

“…publishers can continue telling their stories on their own websites, all while also accessing Twitter’s global audience,” writes Andrew Fitzgerald of Twitter’s Moments Curation team, on the company blog. 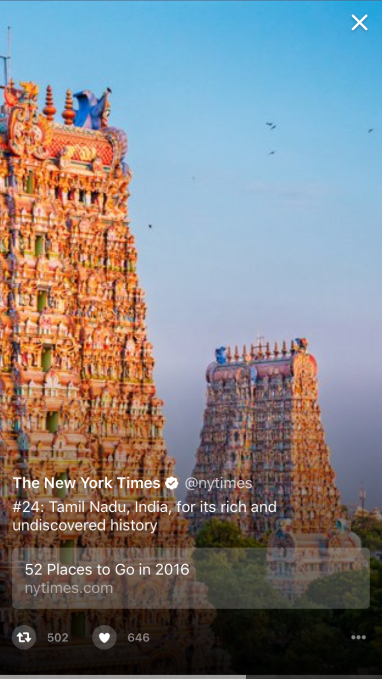 Though Twitter is sending traffic off its platform in these cases, it’s still focused on a mobile-optimized experience. The company has been participating in Google’s open source AMP Project, an effort focused on accelerating the web on mobile devices by utilizing a new, open framework, AMP HTML, that’s based on existing web technologies. The end result is more lightweight web pages that aren’t as bogged down with slow-loading, extraneous code. AMP pages can still offer features publishers require, like analytics and ads, but these are also optimized for a better mobile experience.

Twitter has been a participant in the AMP Project, along with other tech companies including Pinterest, LinkedIn, Nuzzel, WordPress.com, Chartbeat, Parse.ly, and Adobe Analytics, in addition to Google.

The company says that, beginning with Moments, it will now direct users to the AMP versions of news articles when they’re available. That doesn’t mean it will only include AMP pages in Moments, though – it will simply take the user to the AMP version if it’s available.

A number of major publishers have gotten on board with AMP, including Vox Media, La Stampa, BuzzFeed, The Washington Post, Mashable, BBC, The Economist, The Guardian, Huffington Post, Daily Mail, The Guardian, The New York Times, TIME, The Wall Street Journal, Financial Times, Gannett, Hearst, The Telegraph, and others. (Including TechCrunch.)

The updated version of Moments is live now on the Twitter for iOS and Android applications.