Samsung’s Galaxy S7 and S7 edge are smartphones of the people.

Their feature sets don’t necessarily speak to a grandiose vision from Samsung regarding the company’s future. They don’t offer solutions to problems users weren’t aware they had. They don’t shed grams and millimeters in exchange for compromised battery life. In many ways, the S7 devices represent the anti-iPhones.

There’s a clear argument to be made here that the S7 line could be a reactionary move aimed more at keeping existing Galaxy customers happy and excited to upgrade. Samsung has clear motives to do so. The reign of the S6 has been a troubling time for Samsung, which has seen bits of its global smartphone market share eaten away by companies like Huawei and Apple.

But behind all of these moves, Samsung isn’t just playing the yes-man to its critics. Sure, the company is building phones that users want, but they’re building them into an ever-expanding virtual reality ecosystem that Sammy believes will play a major role in its future. 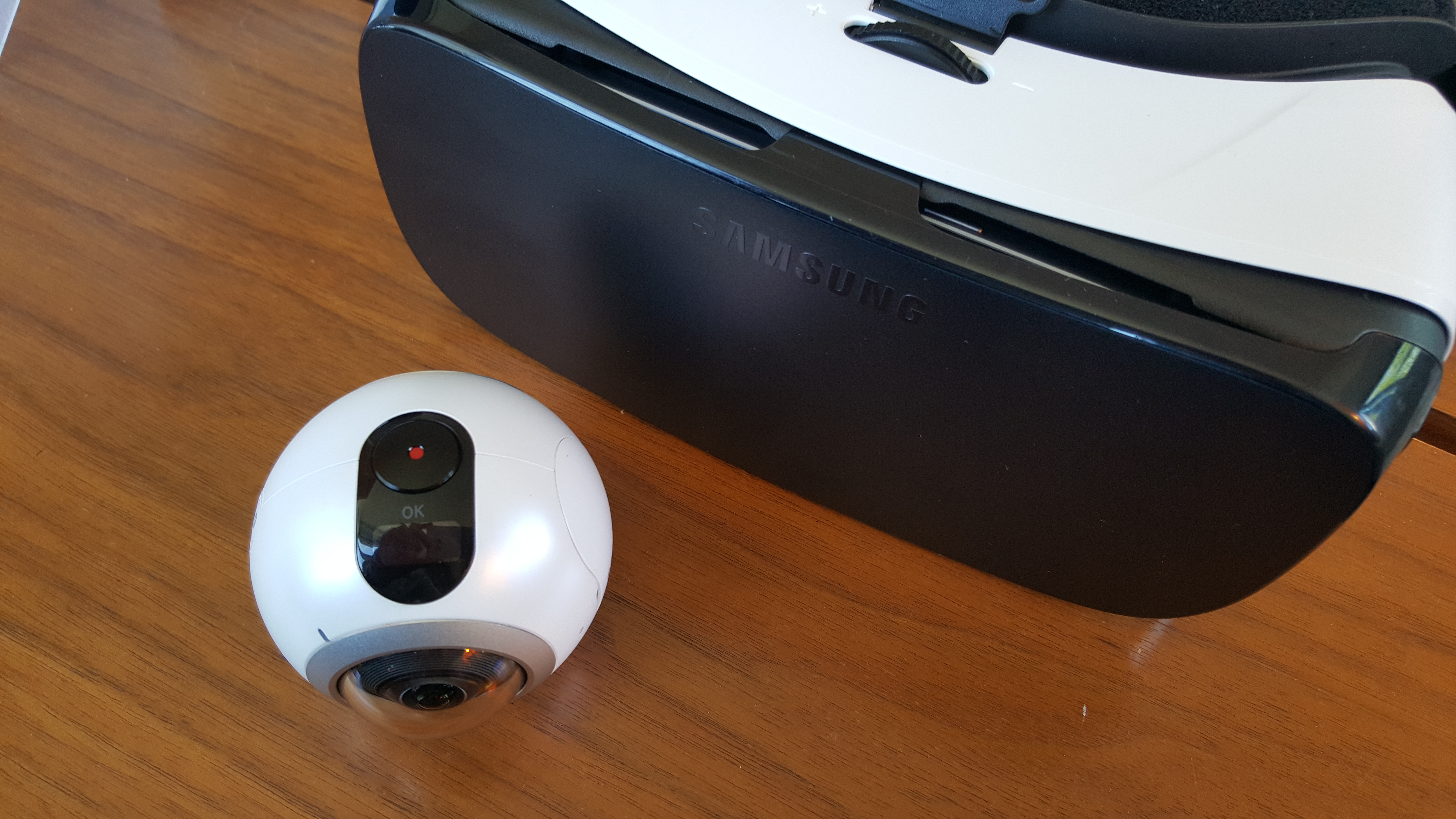 The Galaxy line from the offerings being peddled by other smartphone makers is the rich, next-generation ecosystem that Samsung is building to slot their mobile devices into. This ecosystem is virtual reality.

With a great deal of the smartphone-toting public seeming to be ambivalent or unconvinced by the promises of mobile VR, this is certainly a risky gamble for an otherwise populist smartphone line, but it is also one with massive promise.

The Oculus Gear VR store has yet to throw an experience at me that has flustered either of the S7 devices.

It’s clear that Samsung has been engineering their entire mobile line to fit, physically and conceptually, into the Gear VR ecosystem. The new S7 edge bridges the gap in screen size between the S6 edge and S6 edge+ but snugly fits into the Gear VR headset without a millimeter of clearance to spare. To boot, the widened display of the S7 edge minimizes any headset light leakage from the curved display to imperceptible quantities.

The advances offered by the S7 line’s new “VR optimized” Snapdragon 820 chipset breathe new potential into the quality of experiences that can be viewed on Gear VR. Where the more system-demanding pieces of VR content on the S6 and S6 edge left users ingeniously attempting to cool down their devices, the Oculus Gear VR store has yet to throw an experience at me that has flustered either of the S7 devices.

Following the S7 launch (and the onslaught of new users brandishing their free headsets), expect to see more available experiences pushing the boundaries of mobile VR optimized for the S7. The new Gear 360 camera, which has yet to see a release date or price point, will also offer S7 users the chance to finesse VR content creation and live preview content and produce limited footage edits on the device. 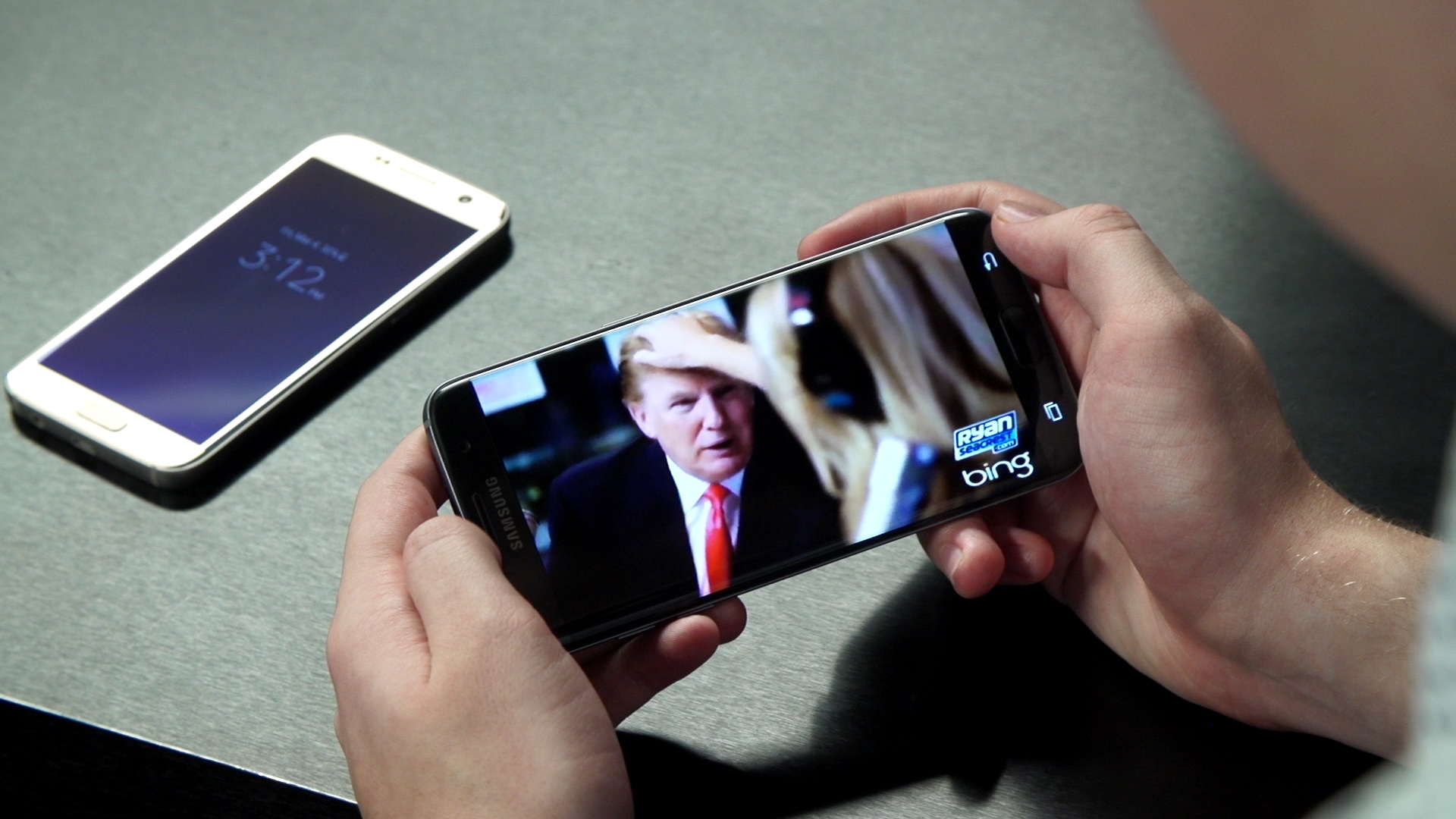 The S7 saw its battery capacity increase nearly 20% while the S7 edge (which is powering a much larger screen now) received a battery with 40% larger capacity.

I am perhaps more mindful with my battery saving techniques than most but I was very impressed by the improvements I saw in the S7 line in regards to battery life, both phones did stellar jobs of lasting me through the day in light of Screen-on Times floating around 6-7 hours.

Sadly, my testament in the video of not having hit 0% fell short more recently after some inspired bouts of pretty extended Gear VR gaming, but in average use the phones pranced from morning charge to evening charge without a sweat which is something I couldn’t always say for the S6 edge

When the Galaxy S6 was first introduced, the groans that resonated most from the audience of pissed off customers were gripes related to the removal of waterproofing, the user replaceable battery and the microSD slot.

The microSD slot is back and housed in the same tray as the microSIM. It’s definitely not the easiest to access if you’re someone who’s regularly swapping out cards, but for most, like myself, it works just great for popping in a card to make room for extra storage when the S7 line’s available stock 32GB runs out.

The new IP68 waterproofing certification for the S7 devices means that the phones can take a dive and stay submerged at a depth of about 1.5 meters for a half hour.

The new camera (more on it later) is disappointingly (but not surprisingly) not optimized for taking underwater photos, which I had hoped the physical shutter button might enable, but attempting to dunk the device in a way that left me the option of snapping a photo was pretty unreliable.

Overall the waterproofing is just a functional safeguard to prevent you from needing to carry around a ziplock bag filled with rice, it does that task incredibly well.

The fingerprint sensors on the S6 devices were borderline useless in that they kept you waiting a bit too long. This too has thankfully seen improvements which you’ll notice immediately. It isn’t quite as speedy as the iPhone 6S but it’s actually usable so I can’t complain about that. 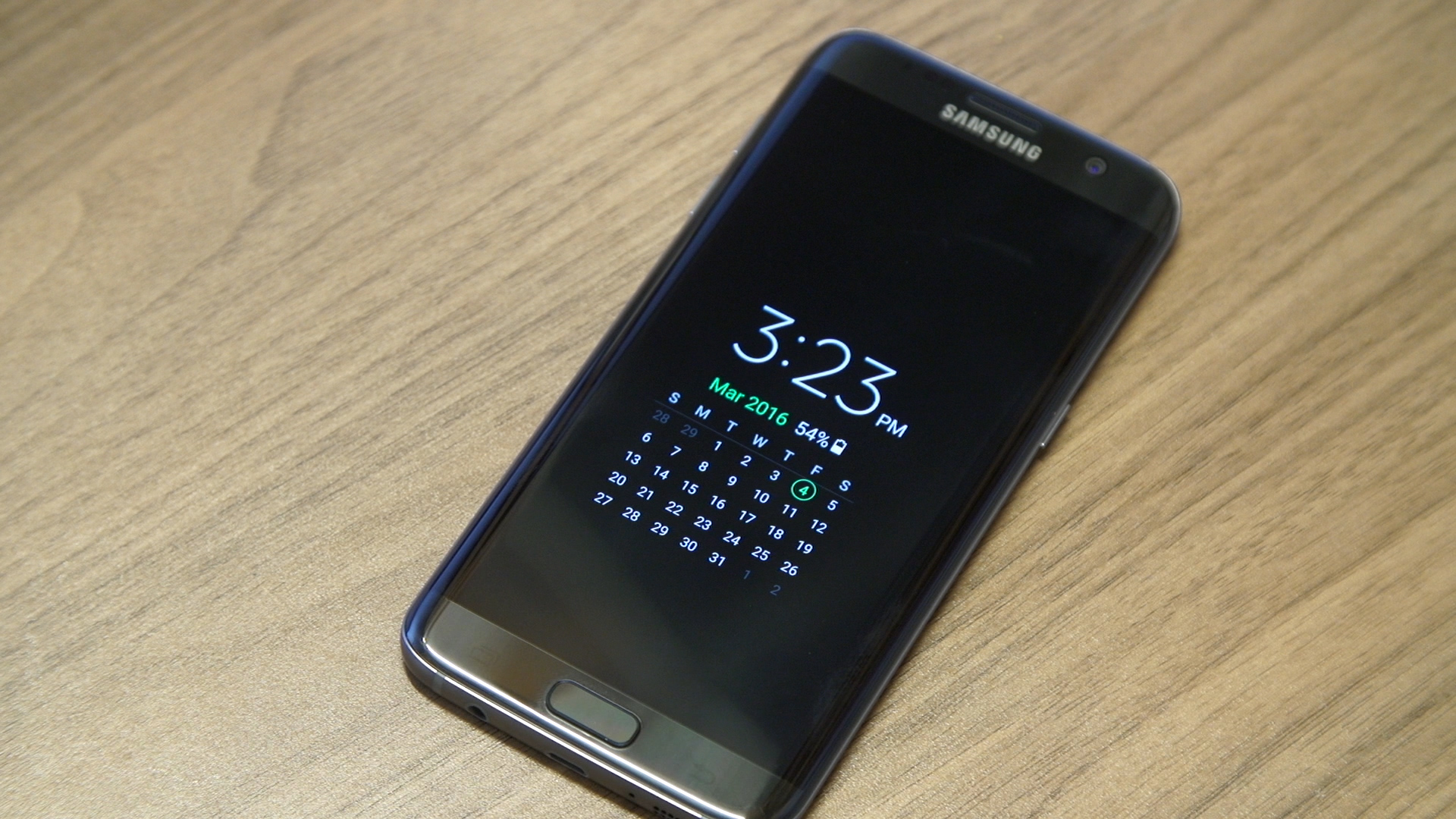 Always on my mind

I imagine it comes largely from the fact that I am a millennial tech blogger with limited smartphone etiquette and an insatiable appetite for notifications, but my phone is actually rarely in my pocket. I walk down the street with it clutched in my hand and I lay it face-up on the table or desk in front of me when I sit down for work/lunch/class.

I bought a smartwatch last summer with the hopes that if I could shift my unfaltering gaze ever so slightly, and it did. The idea of glancing was the key here. Rather than completely redirecting my attention to turn on my phone and momentarily study the transparent laundry list of those sweet, sweet notifications, I could just turn over my wrist and catch up on what I’d missed.

It’s not often that a new smartphone OS feature can forcibly declare its presence and prove its usefulness repeatedly each day, but the staying power of the new Always-on Display is surprisingly meaningful. The feature is finding its way onto a number of the latest generation handsets in one form or another. It owes its comeuppance largely to the isolated advantages of smartwatches, which Always-on has fittingly rendered slightly more obsolete by its presence.

When you have the feature enable, the S7 is always there. It reminds you of the time, the date, the number of emails that have been building up in the background and the number of calls you’ve ignored. Despite its omnipresence, the feature doesn’t appear to have left much of an impact on my battery life when it was toggled on or off. I would imagine that is largely because it achieved its purpose when it was on and I fully woke my phone much less to check out quick facts. 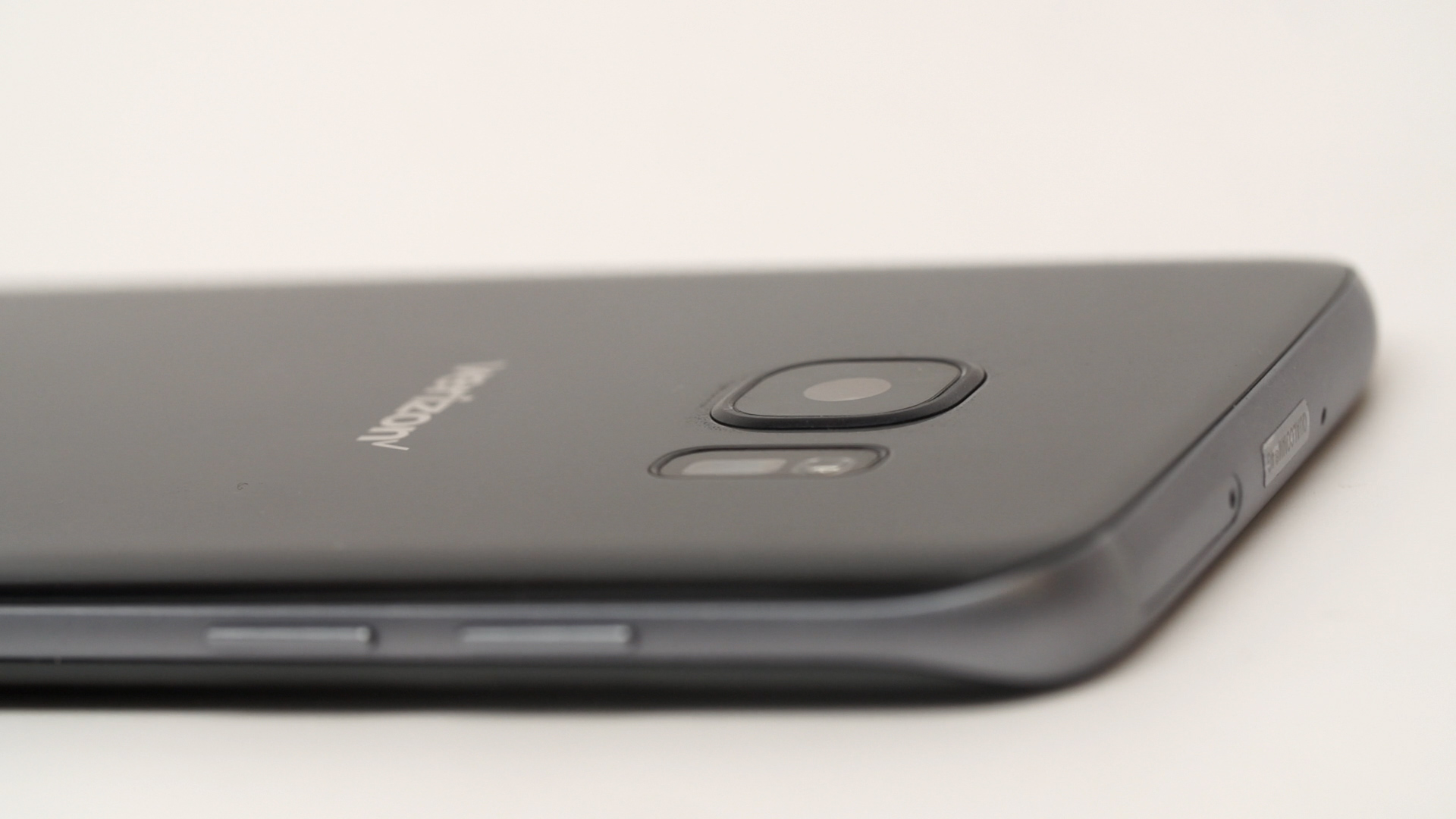 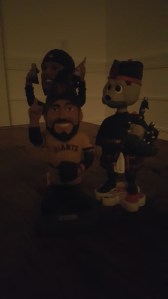 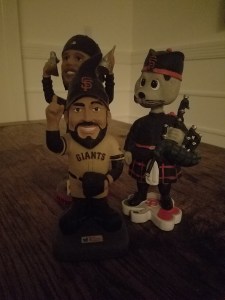 Samsung new improvements to the S7 line’s rear camera came at the expense of megapixel count for the current generation, which dropped from 16MP to 12MP. The camera did also manage to gain a larger f1.7 aperture lens.

The new sensors on the S7 line dominate low-light photography better than any smartphone on the market that I’ve used. Samsung says that their new camera catches 95% more light than the previous Galaxy models. From checking out the photos I had snapped throughout the week, it was easy to see the improvements in photo clarity when light was lacking.

In Geekbench tests of my devices, I found the S7 edge scored a 2279 in single-core performance besting the S6 edge by 52.4%. Improvements in multi-core were more minimal with the S7 edge’s score of 5460 besting its predecessor’s score of 5186 by just 5%. The S7 performed similarly to the S7 edge in my tests. 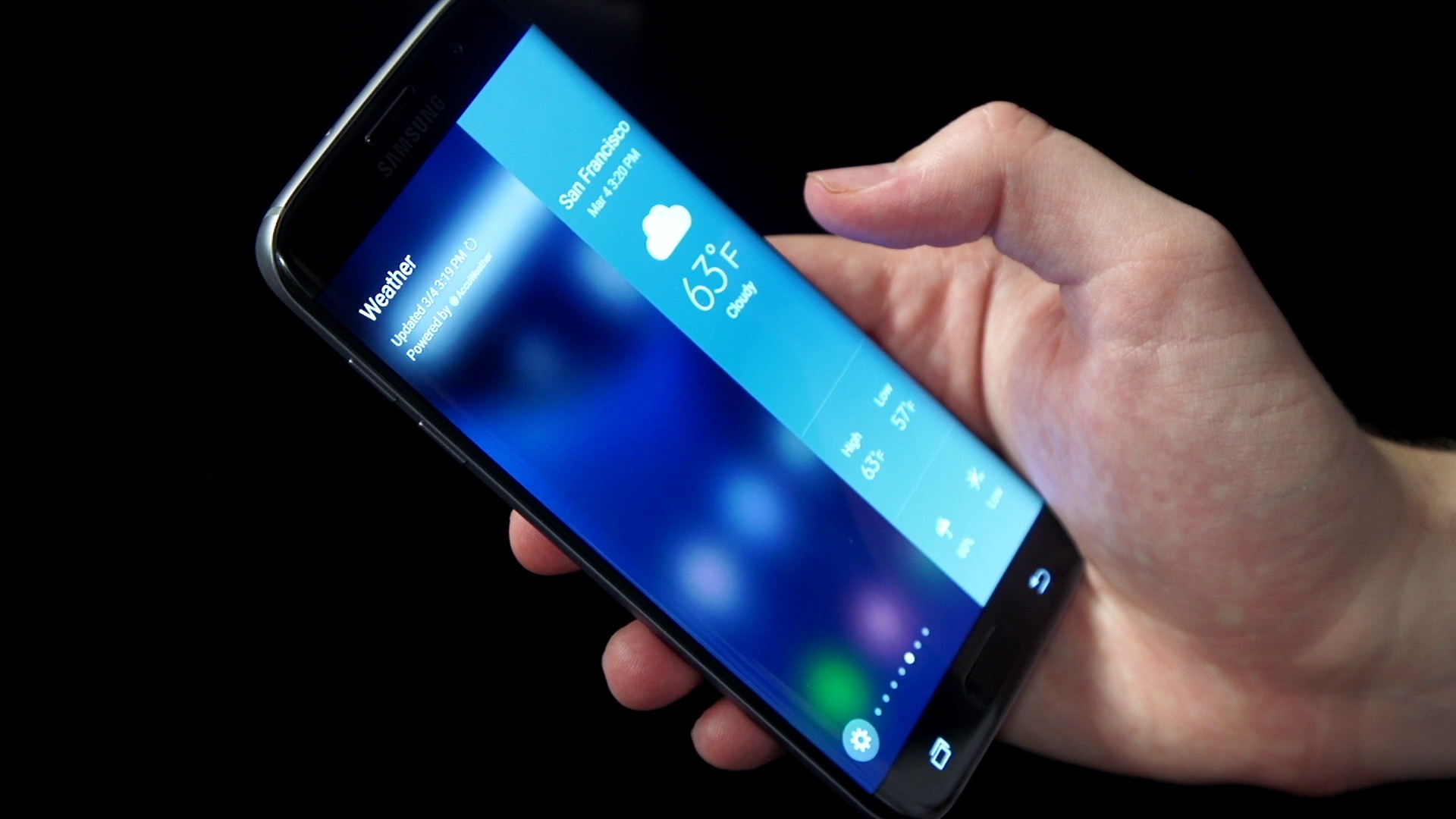 With the S7 and S7 edge sporting such identical internals –aside from battery capacities– you’re not going to be starkly disappointed performance-wise in choosing one over the other. What really matters is your preference in display and design.

Costs for the devices differ depending on the carrier, but the S7 edge generally runs about a $100 premium over the S7. Both devices sport the same resolution, with the S7 edge’s larger 5.5 inch display showing lower pixel density.

The biggest difference between the two it that the S7 edge just feels like a much nicer phone. Build quality is great on both devices, but the S7 edge just sits in your hand so much better. The curved backs on both of the S7 phones are major improvements to the hard-edged flat backs of the S6 line which felt a bit cold and jagged.

The dual edges that give the curved display device its name are still essentially useless from an interface standpoint, but they do look intriguingly sleek.

The new edge app screens are nifty. The Tasks and Apps panels give you quick access to your most used apps and keep you apprised of what you have going on. It’s just, the only thing that could make this feature better was if you didn’t have to swipe up a curved display to use it.

The Galaxy S7 and S7 edge are both strong phones with limited shortcomings. They have welcomed back some of the most sorely missed features of the S5 and are gathering new features like Always-on Display which are sure to become Galaxy mainstays. Samsung’s virtual reality ecosystem continues to strengthen and as the company’s smartphones grow more intertwined with VR there’s potential for some truly magical stuff to break out in the future.

The S7 edge’s curved screen is still just a pretty face, but with a new, larger display and a more ergonomic back panel it has moved itself further to the forefront as the beautiful flagship model for the company.