Google is making it easier than ever to plan a trip or vacation with a new feature that lets you look up destinations, complete with flight and hotels prices, right from its search engine on a mobile phone.

“Google Destinations” is triggered by certain searches — such as “Spain surfing,” “New Zealand hiking,” or “Colorado skiing” — and can also be found when a user searches for a specific country, state, city or other destination.

The service is only available on mobile — Google explained that saying it saw a 50 percent spike in travel-related questions on mobile devices last year — but, beyond convenience, is intended to offer discovery, too. Destinations includes activity suggestions, in the form of curated itineraries, for an initial 201 cities worldwide. So, if you want to visit a new place but aren’t 100 percent sure what to do there, Google hopes to give you some ideas and convince you to book that ticket. 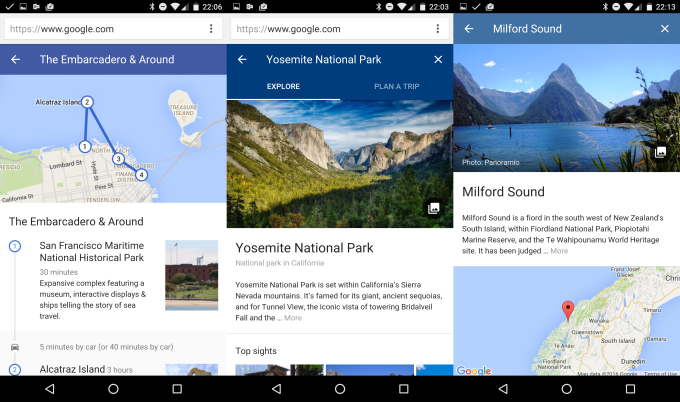 On the subject of bookings themselves, Google Destinations sends users to airline websites to complete their purchase, but it does offer some nifty features before that step. In addition to estimating the cost of a flight and hotel, it allows users to switch their travel dates to help show when prices are at their lowest, or the cost at a particular time of the year. There’s also an ‘Explore’ tab to give you a snapshot of the weather at each destination, an important factor when planning a trip.

Google Destinations is initially available in the U.S. and a handful of other countries. From our time using it, we found it to be quick and useful. It remains to be seen if people will pay for large ticket items spontaneously via their phone, but Google created Street View — the fantasy globe-trotting service that can suck up your time like nobody’s business — and now acting on your travel urges just got a lot easier. If nothing else, Destinations is a far better way to fill five minutes of downtime on the bus than Candy Crush.