Lyft is now allowing third-party developers to build on its platform, starting with Facebook Messenger today.

Uber opened its API to third-party developers more than 18 months ago, announcing a partner integration with Facebook Messenger in December, which allowed Messenger users to order or schedule an Uber and let their friends know they are on their way via the integration since that time.

The Lyft-Messenger integration is pretty much the same as Ubers and it would seem Lyft is late to the party, but Lyft counters it hired the team leading this partner integration a mere six months ago.

The team has been quite busy since coming on board, according to Lyft team lead Vishay Nihalani. The fuzzy pink rideshare unicorn announced a Slack partnership in October and a ride exchange partnership with both the Chinese equivalent Didi Kuaidi and India’s Ola. 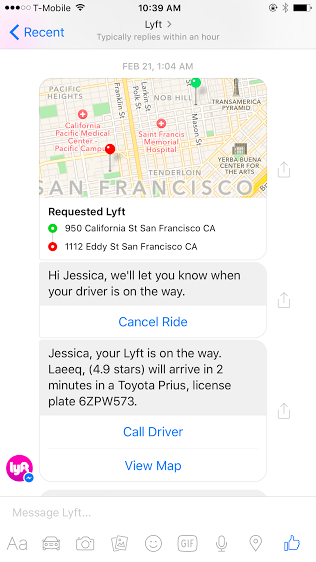 Nihalani, who came to Lyft about 10 months back, now plans to take the company from a transportation app into a transportation platform. He’s working with his team to integrate the ride exchanges promised within Didi and Ola and to make many more partnerships functional using the Lyft API.

“The goal is to make Lyft ubiquitous across a constellation of apps and services and to provide our passengers with access to transportation wherever our passengers are,” Nihalani said.

Like Uber, Lyft says it is currently working with “thousands” of developers in various stages on the platform.

So what will we see with the Lyft API? A Lyft spokesperson tells me the focus is on messaging, transportation and international travel.

Messenger seems to be a natural fit for both rideshare companies hoping to gain market share everywhere. Friends and groups can use it to let each other know they are on their way or to schedule a ride for the other person.

Lyft tells me it has also rolled out an integration with the London-based CityMapper. No plans for Lyft to launch in the U.K., according to the company, but it does see potential with the app in New York City, where CityMapper is starting to gain steam.

The big apple is a target market for Lyft and the company has taken great measures to study transportation here so it also seems to b a natural fit with Lyft’s API plans.

Xerox, RideScout and GlobeSherpa have also partnered with Lyft using the API.

Lyft is rolling out Messenger integration in 11 cities, including San Francisco, New York, Miami, Atlanta, Nashville, Austin, Washington D.C., Denver, and more. The service will be available to all Messenger users throughout the U.S. next week.