Just in time for Super Tuesday, the AP has launched a new tool in partnership with Google and Twitter that helps voters visualize what people are saying about the current elections, candidates and issues, as well as how that interest has changed over time. Effectively, the product, called AP Election Buzz, is a lot like a political-focused Google Trends tool mashed up with Twitter data. And while the online dashboard won’t tell you who to vote for, it does help to display which candidates are dominating online conversation (ahem, Trump) and which topics and issues are currently in the forefront of voters’ minds.

The top charts in AP Election Buzz use a purple line to show Google search interest in political terms and a blue line to show election-related conversation taking place on Twitter. Both charts use February 1st, Iowa caucus day, as a baseline of 100. The tool also stretches back to visualize daily online activity levels from August to present day.

In Google’s case, the Political Index was created by a nonpartisan group of data analysts at the company, and measures search interest in a weighted comprehensive list of topics associated with the 2016 election, including presidential candidates, political figures, policy issues and current events. The index is updated hourly, showing minute-by-minute search activity. 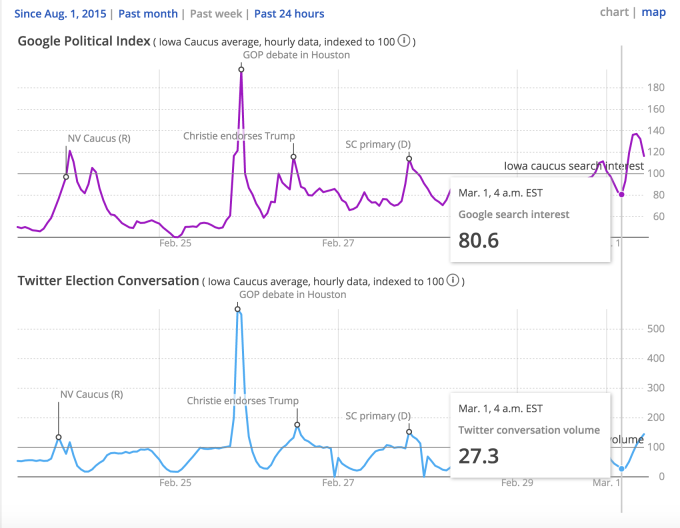 Twitter’s data, meanwhile, is measured by analyzing tweets containing candidate names, hashtags, and other terms related to the election. The numeric volume of Twitter conversations are displayed relative to the number of election-focused tweets that took place on Feb. 1.

On the charts, you’re able to see when certain events triggered spikes in searches or online conversations, though sometimes these occurred at different times on Google or Twitter.

This is in part because the two measurements differ, but also because the two data sources represent different facets of how people are using the internet as related to the elections. That is, people use Twitter to have a conversation, while they use Google to research or learn more about a topic, event, or person. 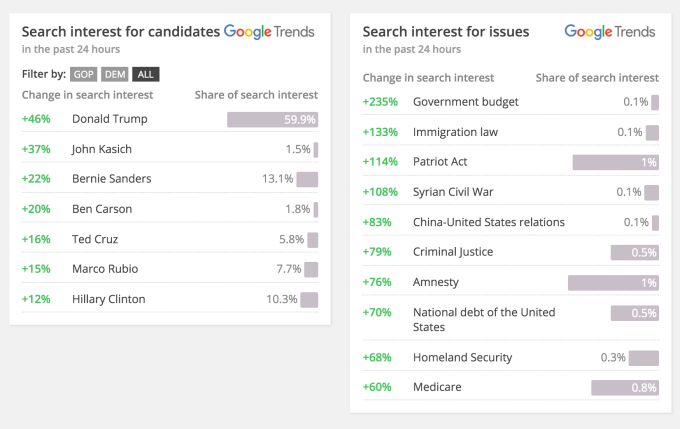 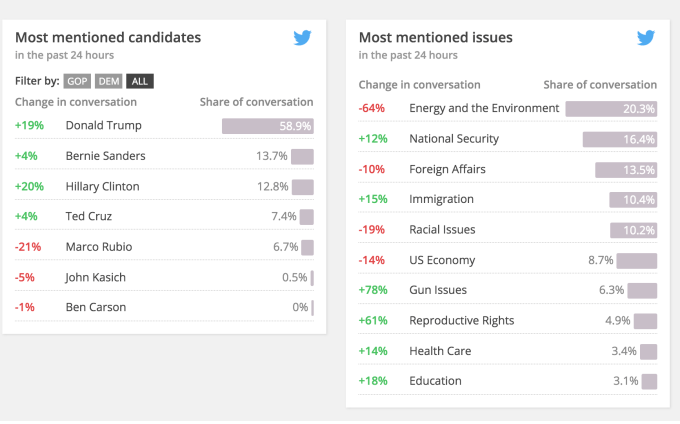 It’s interesting to analyze the differences between Google and Twitter here, where you can see that, sometimes, those topics that are much conversed about aren’t necessarily those that result in users’ searching the web to learn more. Or, on the flip side, you can see where a spike in an online conversation about a topic has likely led to increased searches as users try to educate themselves on the matter via Google searches.

But often, these two charts don’t match up. Over the past 24 hours, for example, the “Patriot Act” and “Amnesty” have claimed the larger shares of search interest on Google (at 1% apiece), while Twitter users have been talking the most about “Energy and the Environment.”

The tool also may not be an accurate predictor of a candidate’s success. For example, Bernie Sanders is seeing more Google search interest and Twitter conversation than Hillary Clinton, but the Iowa caucus results showed Clinton beating Sanders by a narrow margin, indicating the race is tight between the two.

The AP’s tool is part of its larger site focused on the U.S. elections, which includes a selection of the latest news and a delegate tracker. It’s available to AP’s election customers as an embeddable visualization and is viewable now at elections.ap.org/buzz on both the desktop web and mobile devices.