Roger, the walkie-talkie style voice messaging app created by a team of ex-Spotify engineers, has landed on Android.

The service is quite simple, it allows users to send voice messages to each other. While that’s a feature available in almost every messaging app, Roger puts voice messages front and center of its beautifully-designed app, which also includes information snippets — like the weather or time of day — for the location of the person you are talking to.

The team behind the app created it to humanize the dominant mode of communication on mobile — which for most people is text — and encourage more voice conversations.

“While we have never been as connected as we are today, we rarely talk to each other anymore. There are many apps with microphones, but few encourage actual conversations,” Roger co-founder Ricardo Vice Santos told TechCrunch.

The service debuted on iOS late last year and now, just over a month after the startup raised a $1 million seed round, it has become available for devices running the Google-owned operating system. 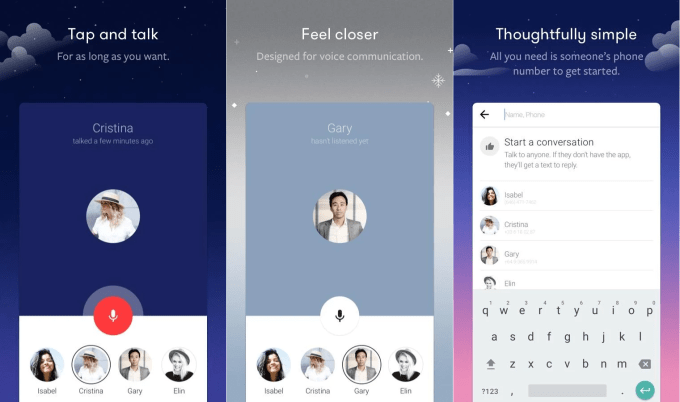 The Roger team isn’t revealing details about its user numbers right now, other than that it has users in over 120 countries worldwide. But the team did share some interesting feedback that it received from one segment of users: those who are visually impaired. (For example, two users took to Audioboo, an audio-based social network to share reviews.)

“We were quite surprised how many blind people became users,” Vice Santos said. “[From feedback with users] we’ve learned more about how blind and disabled people use technology. There are 300 million blind people in the world and [the difficulties of communicating via a smartphone] doesn’t surface enough.”

I’ve been using Roger since it launched and, aside from being an interesting platform to conduct interviews for stories (with Roger’s founders, naturally), I appreciate the design and aesthetics but have struggled to get more than a few of my friends and family to sign up for (what they perceive to be) Yet Another Messaging App.

That said, the service does have a nifty feature for reaching those not using it. An SMS integration allows you to send audio messages as a link that can be opened by the recipient even if they don’t have the Roger app, while Vice Santos hinted that other “useful” features will come soon. Added to that, Social Capital, a VC renowned for backing innovative businesses, is an investor, which itself hints that there may be more advanced plans in the pipeline.