Mercari, a peer-to-peer marketplace app, has claimed the title of Japan’s first pre-IPO startup unicorn after raising 8.4 billion yen (about $75 million) at a valuation of over $1 billion. This is the Tokyo-based company’s first Series D and brings its total funding to 12.6 billion yen (about $111 million).

Chief financial officer Kei Nagasawa says the new capital will be used to grow Mercari’s services in Japan and expand in the United States (where it launched in September 2014) and the European Union. The company is also keeping an eye on potential merger and acquisition targets.

The three-year-old company claims its app has been downloaded a total of 32 million times (with seven million of that number from the U.S.) and that its current gross merchandise value is above 10 billion Japanese yen (about $88 million) per month.

It’s worth noting that Japan has several public tech companies that have reached a market capitalization of at least a billion dollars. Mercari’s annual revenue meant it had the opportunity to hold an IPO on the Tokyo Stock Exchange, but Nagasawa says it decided to stay private to retain strategic flexibility as it expands overseas.

In the U.S., Mercari has to compete with a long roster of e-commerce players, including Amazon and eBay. It focuses on mobile commerce, but in that category it is up against other well-funded startups like Wish (which connects Chinese merchants with American customers), Jet, and fashion marketplace Poshmark (about half of the products sold on Mercari in Japan are clothing and accessories). 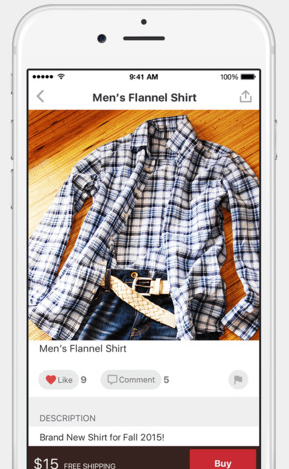 Mercari, however, has had practice differentiating itself in Japan, where it came in as a rival to Yahoo Japan’s Yahoo Auctions, which—like Mercari—also focuses on consumer-to-consumer transactions.

Nagasawa says the company’s strength is positioning itself with a “pure mobile focus on C2C,” making it easy to list items on its apps, and monitoring vendors closely to make sure none of them are actually business merchants pretending to be individual sellers (its customer service team has about 100 employees in Japan, the U.S., and the Philippines who keep an eye on listings).

It also integrates with Yamato Transport, one of Japan’s largest logistics companies, to provide shipping: once vendors sell an item, they get a barcode they can stick on their package before dropping it off at Yamato’s service centers without having to write out addresses or calculate postage.

Trying To Succeed Where Other Asian E-Commerce Giants Haven’t

In the United States, Mercari has stuck to a similar strategy. It also positions itself as a “flea market” app, for users to sell each other small consumer goods like clothing and collectibles. It has partnered with USPS and FedEx for shipment and uses Braintree as a payment vendor.

“We do acknowledge that eBay is still the dominant player, but there is no dominant player at this point in mobile. We are a pure mobile player. Another difference is that while you see a lot of classified players in the U.S., like Craigslist and OfferUp, they don’t manage payment and logistics also,” says Nagasawa.

Mercari makes revenue by taking 10 percent of each sales in Japan, but it won’t monetize in the U.S. until it gains more scale and is still deciding what its take rate there will be.

With its newly minted unicorn status and worldwide expansion plans, Mercari earns itself comparisons to Rakuten and Alibaba, two Asian e-commerce players that have become very successful in their home markets of Japan and China, respectively, but struggled to gain a foothold in the U.S.

When asked how Mercari plans to succeed there when Rakuten (Japan’s largest e-commerce site) hasn’t been able to, Nagasawa says that the business-to-consumer market is more competitive and that Mercari wants to do a better job of localizing by hiring local product managers in its U.S. office and sending its Japanese engineers over there to work with them.

“I think that’s the key to see how our product thrives in the U.S. We’re not doing a fundamental change of our product, but there are a lot of tweaks. For example, in Japan, people spend a lot of time on the platform. The average daily active user spends more than 40 minutes on the platform. It’s like a magazine, you flip through the pages but you aren’t looking for something specific,” he says. “That’s the preference for Japanese users, but in the U.S. people want to search more efficiently and they want more recommendations.”